Why Is This Woman Being Denied Entry to the US? 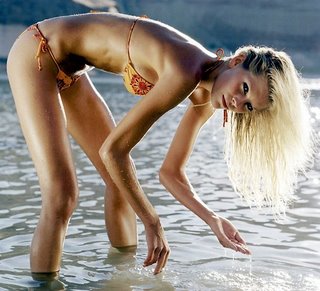 Nobody would oppose immigration if all immigrants looked liked May Andersen

Andersen, 23, will be returned to the Netherlands on the next available flight, said U.S. Customs and Border Protection spokesman Zachary Mann.

The model, who has appeared in SI's swimsuit edition and posed for Victoria's Secret, was charged with assault after allegedly becoming unruly and violent on the flight last Thursday. She was held in the Miami-Dade County jail and then moved to federal immigration custody.

Mann said Andersen was seeking to enter the U.S. under the visa waiver program, which permits some visitors to enter without visas. His agency on Monday determined that Andersen was "inadmissible" under that program.

The specific reasons for the denial were not provided because of federal privacy protections.

Andersen was charged with simple battery, resisting arrest without violence and disorderly intoxication. It was not immediately clear Monday how the immigration decision would affect that case.

Her attorney in Miami did not immediately return a phone call seeking comment.