While the President and his supporters continue to say that there is nothing the administration can do about the rapidly rising gas prices, the President has decided to use this as an opportunity to do more environmental damage than he has already done. Rather than impose tighter regulations on oil companies, create price caps for gas, create a windfall profits tax for big oil, or placing pressure on foreign oil suppliers, Bush has decided to weaken environmental regulations as his solution to the problem.

It is conservative dogma to blame environmentalists for high energy prices. There is absolutely no truth to this belief. Even if you did somehow buy into the myth that environmentalists are responsible for the lack of new oil refineries, how is that belief supported by the political realities of today. The Republicans have controlled Congress for the past 11 years. They have had the White House and Congress for the past 5 1/2 years. It is no secret that the Republican party is hostile to the environmental movement. If the solution to the problem is more refineries, then why haven't the Republicans done this at some point in the last 10 years?!

The reason is that they know that is not the issue. Keeping refinement at current levels allows the oil industry to artificially control supply, and manipulate costs to consumers. Have you ever noticed how prices always spike before major holidays like Memorial Day, 4th of July, and Labor Day? Did you also notice that when the prices go down after the holiday, they never go back down to where they were before the spike? This is intentional manipulation to maximize oil company profits, and it has worked brilliantly. Exxon Mobil is now the most profitable company in US history! They just gave their CEO a $400 million retirement package. They make plenty of money, and dole just enough out to Republican lawmakers to ensure their cooperation. 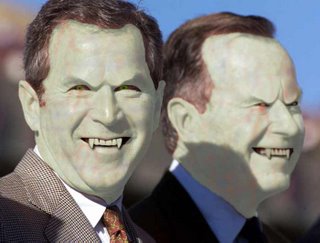 The environment has nothing to do with it. In fact, if environmentally sound policies had been followed since the 1970s, cars would be averaging over 50 mpg, emissions would be drastically lowered, and alternative energy would be a reality -- not a bogus talking point in Republican focus group tested stump speeches.

The President may not be able to simply snap his fingers and make gas prices go down; but when the Bush Administration and the GOP send the strong signal that they will allow the oil industry to do whatever it wants, they have no credibility when saying the situation is "out of their control." It could be in control, if you acted in the interests of the American people and not those of oil executives.

This new "easing" of environmental rules has nothing to do with lowering gas prices. This is what the oil industry has been asking for for years. This just makes it even easier for big oil to make even more money, while the rest of us have to make difficult life choices to be able to afford to do things like drive to work, drop the kids off at school, or take a family vacation. This is a long-term problem that requires a real solution. Making concessions to the people putting us in this situation cannot be considered a solution, and is certainly not leadership. 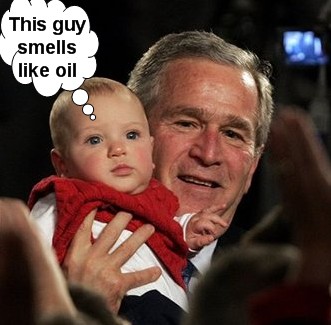 Bush Eases Environmental Rules on Gasoline
(AP) President Bush on Tuesday ordered a temporary suspension of environmental rules for gasoline, making it easier for refiners to meet demand and possibly dampen prices at the pump. He also halted for the summer the purchase of crude oil for the government's emergency reserve.

The moves came as political pressure intensified on Bush to do something about gasoline prices that are expected to stay high throughout the summer.

Bush said the nation's strategic petroleum reserve had enough fuel to guard against any major supply disruption over the next few months.

"So, by deferring deposits until the fall, we'll leave a little more oil on the market. Every little bit helps," he said.

Easing the environment rules will allow refiners greater flexibility in providing oil supplies since they will not have to use certain additives such as ethanol to meet clean air standards. The suspension of oil purchases for the federal emergency oil reserve is likely to have only modest impact since relative little extra oil will be involved.

The high cost at the pump has turned into a major political issue, with Democrats and Republicans blaming each other for a problem that is largely out of Congress' control. Republicans are worried that voters paying more than $3 per gallon would punish the party in power. Democrats want to make that happen.

Bush said that high gasoline prices are like a hidden tax on consumers and businesses, although he said the nation's economy was strong. He urged Congress to take back some of the billions of dollars in tax incentives it gave energy companies, saying that with record profits, they don't need the breaks. He urged lawmakers to expand tax breaks for the purchase of fuel-efficient hybrid automobiles.

The president said Democrats in the past have urged higher taxes on fuel and price caps to control fuel expenses, but he said neither approach works. Instead, he called for increased conservation, an expansion of domestic production and increased use of alternative fuels like ethanol. (read more)

I couldn't agree more. The oil corporations have such a monopoly on the oil industry, they can do whatever they want. They are the ones that are holding back alternative fuels, and they are the ones that pressure government to lower restrictions on automobiles. The year that had the most fuel efficient cars was 1987. 1987? Why the hell isn't it 2005, and the previos best year be 2004? Why aren't cars getting more fuel efficent rather than less. To state it simply, its the oil industry. Did you know that the majority of cars produced at the turn of the century (around 1900), were actually not powered by gas. Most were powered by electricity, biomass, and other alternatives. Everyone thinks these alternatives are new, but we have had them for many decades. The oil industry got involved in the auto industry at the turn of the century because they had all this oil that they didn't know what to do with. So they convinced automakers to change their motors over to combustion engines, forcing the public to rely on the oil industry, and thus, the seed was planted, and now we find ourselves in this situation where we are completely dependent on the oil industry, but don't have the motivation or desire to really do anything about it. It just really sucks.

In this country, there is very little we can do about it as long there is one party rule. But the Democrats haven't been strong on this either. Personally, I think the environment is a winning issue, and does cross party lines. But the Dems (like usual) are afraid to take a stance because they are afraid of ticking off the Rush Limbaughs and Brit Humes of the world who will be extremely critical.

I hope the environmental issue becomes a significant one for the Dems in the next two election cycles, and they are able to do something on alternative energy.