How Will Tony Snow Explain This To The Press Corps? 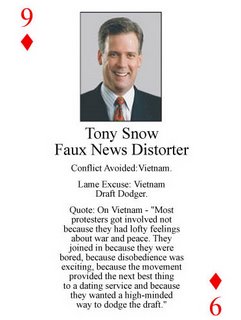 It is now rumored that Fox News commentator Tony Snow will be replacing Scott McClellan as White House Press Secretary. Interesting choice, W. Fox is so good at propaganda, that it seems natural to choose someone from the network to start spinning for the president. Even though I despise Mr. Snow for being one of the slickest liars in the media today, he does have occassional flashes of honesty. Check out some of his past honesty as it pertains to George W. Bush (from ThinkProgress):

– Bush has “lost control of the federal budget and cannot resist the temptation to stop raiding the public fisc.” [3/17/06]

– “No president has looked this impotent this long when it comes to defending presidential powers and prerogatives.” [9/30/05]

– “When it comes to federal spending, George W. Bush is the boy who can’t say no. In each of his three years at the helm, the president has warned Congress to restrain its spending appetites, but so far nobody has pushed away from the table mainly because the president doesn’t seem to mean what he says.” [The Detroit News, 12/28/03]

– “Bush, for all his personal appeal, ultimately bolstered his detractors’ claims that he didn’t have the drive and work ethic to succeed.” [11/16/00]

– “George W. Bush, meanwhile, talks of a pillowy America, full of niceness and goodwill. Bush has inherited his mother’s attractive feistiness, but he also got his father’s syntax. At one point last week, he stunned a friendly audience by barking out absurd and inappropriate words, like a soul tortured with Tourette’s.” [8/25/00]

– “He recently tried to dazzle reporters by discussing the vagaries of Congressional Budget Office economic forecasts, but his recitation of numbers proved so bewildering that not even his aides could produce a comprehensible translation. The English Language has become a minefield for the man, whose malaprops make him the political heir not of Ronald Reagan, but Norm Crosby.” [8/25/00]

Media Matters has compiled some other gems from Mr. Snow. Check these out.

It's official: Fox News and the White House have officially merged.

He's already spinning excuses about his previous criticisms of Shrub.. too funny.

I think that negative stuff was leaked by the WH so that they would look like they are bringing in "new attitudes." They are not. Snow is a 99% toadie for the Bush Administration. On the rare occassion where he went off the reservation, he was just waiting for his next glass of Kool-Aid.

Now Snow will "officially" be on the WH payroll. He's been unofficially on it for 6 years.