40 Year Old Virgins and Whatnot

Pretty uneventful weekend this time around. There were no shows worth going to, and not a whole heckuva lot else to do either. I ended up going to a friend's house and watching The 40 Year Old Virgin on pay-per-view. I wasn't sure if I would like the movie, which is why I never went to see it in the theater. It looked like it could have been just one, long, dumb joke. Thankfully, it wasn't.

Steve Carell -- who played Andy, the virgin -- was hysterical. Very different character than he plays in The Office. My favorite scene is definitely the one where Andy goes to get his chest hair waxed off. Supposedly, Carell was really getting his chest hair yanked out, and the crazy shit he was yelling out were his actual spontaneous outbursts. Regardless, the shit was funny. I did find it a bit hard to believe that a babe like Catherine Keener would fall for a 40 year old virgin that works in an electronics store, but that's Hollywood for you. 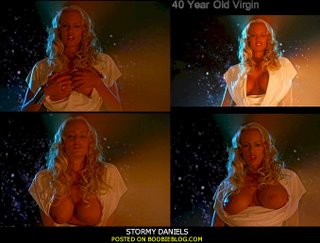 Besides that, I don't have too much to report. I finally got a copy of the Omaha WEEN show from last November (11-29-05). The concert was one of a handful of dates WEEN performed to make up for cancelled shows from 2004. The show was incredible as I remember it. The concert fills up three CDs. I think I may have to smoke up and give these discs a listen today before I do my radio show. But it's a beautiful day outside, so I may try and be outdoors this afternoon instead.

I enjoyed the 40-year-old virgin as well, one of the better comedies that have come out lately. And Steve Carell was very funny. The only thing I didn't like was the movie seemed kind of long for a comedy, I think it was over 2 hours, and by than, I just wanted it to be over. :)

It was a little long, maybe. I saw the "extended" version which I guess has about 10 mins or so of extra scenes. Still, I never really got tired of it.