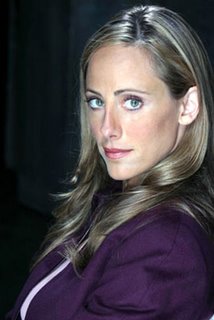 So what is it about Jack Bauer's taste in women? I figured a badass like him could choose to be with anyone he wanted. If that's the case, then why does he keep going for these uber-skinny, prissy bitches? Oh, and, many of them seem to be traitors. At least that's how it looks based on how last night's episode ended.

As far as physical attractiveness goes, Audrey Raines wins. The loser is easily Jack's deceased wife, Teri. She was just gross. So when Nina Myers killed her in season one, it helped us all out a great deal.

But last night's development -- that Audrey is the source of the blueprints that the terrorists are using to release the nerve gas into Los Angeles -- looks pretty bad for Jack. This would be the second time that he has gotten personally involved with a woman he works with AND who is also working with terrorists!! It would seem his judgment on women is severely impaired. Or is it?

I'm not sure I believe that Audrey is really the source for the terrorists. Remember, last season it looked like her husband, Paul, was connected to terrorism. He was cleared, and ended up being a big help to Jack and CTU (he even took a bullet for Jack). Of course, Jack still allowed him to die, but that's another story... 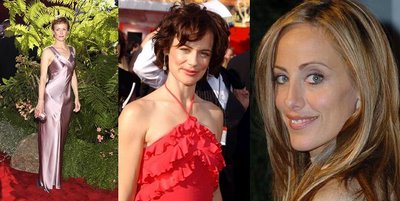 The ladies of '24': Teri Bauer, Nina Myers, Audrey Raines
And I need to clear up something about yesterday's post on '24.' I wrote about the Vice President "But that new VP -- Gardner (played by Ray Wise) -- didn't he kill Laura Palmer? He might be worse." I got a few emails saying that the name was Sherry Palmer or David Palmer. No. I am talking about Laura Palmer from Twin Peaks. It was a joke. Ray Wise played Leland Palmer on that show, and it was revealed that he was the one who killed Laura (that was the major mystery of the show, sorry to spoil it if you didn't know).

However, my comment about not trusting VP Gardner is on point. He had to have arranged the attack on Wayne Palmer, so he is definitely questionable. All right, I have already written too much on this show. Feel free to comment and tell me I am way off. I'm not. But, go ahead and say what you want.

Jack seems to want to be with women who provide nothing but trouble. Actually, that's kind of like life... Hmmm.

Southie- It is kind of like life. Women are trouble.