You Couldn't Make Up Sleazier Stuff Than This

** Where is the outrage from the right on Mary Matalin's racially charged comments about black civil rights leaders? Republican operative and former aide to VP Dick Cheney, Mary Matalin, said the following on Fox News' Hannity & Colmes: "I think these civil rights leaders are nothing more than racists. And they're keeping ... their African-American brothers enslaved." Hmmm...a Republican using a slave analogy to discuss a political opponent. I thought Republicans never did that!? Disingenuous motherfuckers. 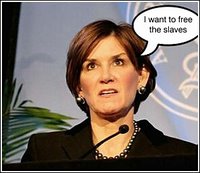 ** Republicans just can't help themselves -- they have to be sleazy and corrupt. Today in the House of Representatives, disgraced and criminally indicted Rep. Tom DeLay (R-TX) was appointed to the House Appropriations Committee (which has oversight on controls the funding for the Justice Department). The same Justice Department that is handling the investigation into criminal lobbyist (and DeLay's best friend) Jack Abramoff. So DeLay will now have oversight into an investigation that could eventually indict him? Are we still living in America? This is, without a doubt, the most ethically challenged Congress in history.

** The Republican news network, Fox News, edited out the audio of the applause from the crowd after Rev Joseph Lowery criticized Pres. Bush at Coretta Scott King's funeral. The Fox commentators then went on to comment about how "muted" the crowd was, and how well Bush went over. Fox News has left the realm of political advocacy, is now completely propaganda. They just make shit up!