What Does It Take To Start a Cartoon Controversy? 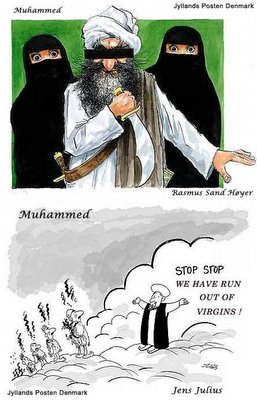 You no doubt have read about the wave of violence that has erupted throughout the Muslim world over a cartoon published in a Danish newspaper. The violence has spread like a wildfire into Muslim communities throughout Europe as well. The editor of a French newspaper was fired for re-printing the "offensive" cartoon. I am showing two of the cartoons here on The Dark Stuff, not because I am anti-Muslim, or that I agree with the message of the cartoons (I'm not even 100% sure what the original context of the images is). I am showing it because of the enormous hypocrisy of the protesters.

This cartoon has prompted calls from Muslim extremists to kidnap or attack all Europeans in Arab countries, and has prompted a boycott of Danish businesses. The protests are very violent and incendiary. They are full of threats of terrorism against anyone who prints the cartoons -- and calls for the "extermination" of those who "slander" Islam. Here is a collage of photos of the violence around the world. 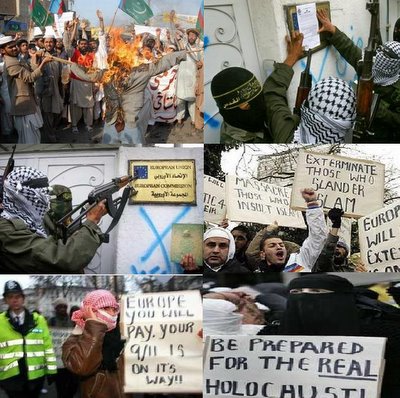 I wonder how many of these same folks sat back, smoked their pipes and laughed when the following cartoons were printed in the Arab media: 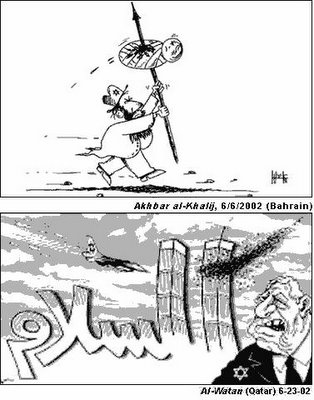 Take a brief visit to the Anti-Defamation League's (ADL) website (www.adl.org) and you will find numerous anti-semitic cartoons that are published on an almost daily basis in the state-run Arab media. I think the word you are looking for is...hypocrisy. Yeah, that's it.
Posted by Dave Splash

When I first made this point, I got a reply from another person: "But there is a difference between cartoons which ridicule a people as a whole, and those which ridicule their leaders - religious, political, or otherwise."

Let me see then any major European (or even US) magazine print a cartoon of Moses with big nose and money in his hand. If there is no such cartoon, my point still stands: Freedom of speech? What freedom of speech? The newspaper would not print anything if they don't think they can get away with it.

Your point is way off the mark. Did you not see the examples I showed you of how the Muslim and Arab media repeatedly makes cartoons that despict Jews with big noses and "money hungy."

You conveniently ignored that. My point for printing both kinds of cartoons, is to show that you cannot expect to be taken seriously about your outrage, when you said absolutely nothing while anti-Jewish cartoons are published all the time in Musim papers.

I said it in the piece...its called hypocrisy.

howard i dont think i couldve said it better myself. it is a problem of fundamentalism. fundamentalist muslims have taken control in the post-9/11 world, and have been looking for any reason to "get back" at western society. i bet the average secular muslim would find these cartoon comical, much the same way american society publishes cartoons depicting moses and jesus.

let me clarify by saying that extreme fundamentalism in any religion or political movement is dangerous.