A nice, lighthearted story to break up the hard news you always find on The Dark Stuff...
NEW YORK - He came from the streets of Brooklyn, a cool customer on four legs, the perfect bait for a sting on a fake veterinarian.

Authorities on Wednesday introduced the 8-month-old former stray cat that posed as a would-be patient while police investigated a college student accused of treating pets without a license.

At a news conference, Fred sported a tiny badge on his collar as he posed for photos with owner Carol Moran, a prosecutor. 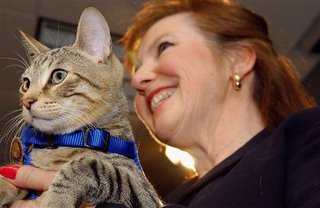 Fred shared the spotlight with Burt the Boston terrier, an alleged victim of Steven Vassall, 28, who was arrested last week and released on $2,500 bail.

Burt’s owner, Raymond Reid, contacted authorities after the dog survived a botched operation. In hindsight, he said, he should have been suspicious of a veterinarian who only made house calls and treated animals at an undisclosed location.

Vassall “seemed like a genuinely nice guy,” Reid said. “I’m glad they caught him, but at the same time I feel sorry for him.”

Last week, an investigator posing as Fred’s owner summoned Vassall to an apartment rigged with a hidden camera. Authorities played a videotape at the news conference showing the defendant saying the kitten could be neutered for $135.

Vassall was arrested as he left the apartment carrying Fred in a box and cash for the operation. Investigators later recovered a price list for vaccinations and other procedures, including surgeries.

It was unclear how long Vassall — a college student who once worked as a laboratory assistant in a vet’s office — allegedly scammed pet owners before Fred helped put him out of business.

Joyce Clemmons of the nonprofit Animal Care and Control, which rescued Fred, predicted the kitten had a future in law enforcement.

“He’s going to be the detective for the animal world,” she said.
Posted by Dave Splash