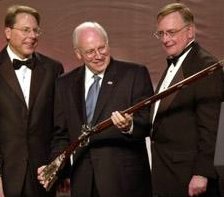 by Paul Begala (TPM Cafe)
As a guy whose been hunting in South Texas for 30 years, and who's been hunting three times in the past six weeks, I cringe at the Washington Post's use of the benign verb "sprayed" in the lede of the Cheney hunting accident story.

When you hit a man with a 28 gauge (likely 7 and a half shot) and land him in intensive care, you have not "sprayed" him. You've shot him.

I realize reporters were reliant wholly on Katharine Armstrong, Mr. Cheney's host, who laid the whole thing at Whittington's feet, but let me offer a few observations.

On the notion that a 28 gauge "shoots fewer pellets and has a smaller shot pattern than a 12 gauge," as the Washington Post reports: That's true. But no one hunts quail with a 12 gauge. A 12 gauge is used for high-flying, large birds like geese, ducks and pheasants. If you brought a 12 gauge to a quail hunt you'd be laughed off the ranch...and if you hit a bird there'd be nothing left but feathers and feet.

Second, was Mr. Whittington 30 yards away - as the Post reports - or 30 feet, as the Times reports? The difference is important.

Third: It is not best practice - in fact it's unsafe - to send 3 guns into the field and to chase 2 coveys at once. I would never - ever - go chasing a second covey while someone else was occupied with a first covey. My experience is that safe quail hunters generally hunt no more than 2 guns in the field at a time, and chase one covey at a time. To do otherwise is reckless

Ms. Armstrong says Whittington should have announced himself upon approaching Cheney. That is right. At the same time, Cheney, as a shooter, has an obligation to be aware at all times of the whereabouts of the dogs (who don't announce themselves) his fellow hunters, the guides, dog handlers, etc. I've been on hunting parties of ten men, and it's the obligation of the shooters to know where each of them is, and to be sure they are safe. Cheney knew Whittington was chasing a bird. If he could not see Whittington, if he was not 100 percent sure of his whereabouts, he should not have taken a shot. No bird is worth it.

In sum, even from Ms. Armstrong's whitewashed account, it sounds to me like Cheney was not being safe.

To quote Mary Matalin to vouch for Cheney's safety, as the Post does, is absurd. I love Mary - she's married to my best friend. But she was 1500 miles away, drinking a fine Rhone, no doubt. And I daresay she's never been hunting in her life. And yet the Post quotes her reassuring us that Cheney "was not careless or incautious." Baloney. That's like quoting me on Mrs. Bush's inaugural ball gown. I didn't attend the event, and I don't know squat about the subject.

While hunting accidents do happen, this one may have been avoidable - if Mr. Cheney and his companions had been less trigger-happy and more prudent.

But I guess we already knew that.

(AP) CORPUS CHRISTI, Texas - The 78-year-old lawyer who was shot by Vice President Dick Cheney in a hunting accident has some birdshot lodged in his heart and he had "a minor heart attack" Tuesday morning, hospital officials said. (read more)
Posted by Dave Splash