(Huffington Post) The real story is already emerging, if you're willing to do a little digging. Cheney and Whittington went hunting with two women (not their wives), there was some drinking, and Whittington wound up shot. Armstrong didn't see the incident but claimed she had, Cheney refused to be questioned by the Sheriff until the next morning, and a born-again evangelical physician has been downplaying Whittington's injuries since they occurrred.

Neither the press nor law enforcement seems inclined to investigate.

Before the right-wing commenters howl - there's documentation for all of these statements. Let's take them one by one: In addition to Cheney and Whittington, the hunting party included Katherine Armstrong (who was in the car at the time of the shooting: more on that later). After lots of evasive comments that only referred to a "third hunter," we now know her identity: Pamela Willeford, the US Ambassador to Switzerland. 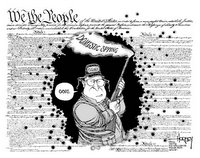 Then there was this Armstrong quote on MSNBC and picked up by Firedoglake (later dutifully scrubbed, but preserved on Google cache): "There may be a beer or two in there," (Armstrong) said, 'but remember not everyone in the party was shooting.'"

Interestingly, Armstrong's playing with words here. She later said that she (Armstrong) hadn't had anything to drink, so at least one of the other three must have been drinking - and the other three were shooting. So while her statement was literally correct ("not everyone ... was shooting"), it gives the false impression that nobody drank and shot.

Then there was this item (courtesy kos):

Armstrong said she saw Cheney's security detail running toward the scene. "The first thing that crossed my mind was he had a heart problem," she told The Associated Press.

In other words, she didn't see the accident. All of her statements, replete with colorful sidebars about getting "peppered pretty good," gave the false impression she was an eyewitness. She wasn't.

And what about Dr. David Blanchard, who made such light of Whittington's injuries? Before the heart attack occurred, Blanchard gave no indication that pellets had entered Whittington's torso or major organs (we now know that at least one other pellet entered his liver). I found an interesting quote. After asserting that spiritual beliefs help people recover more quickly (which studies have suggested may be true), Blanchard said this of people with out of body and near death experiences:

"These people do quite well in their disease processes," he said. "The Lord wasn't quite ready for them yet . . . It makes believers out of them."

It's likely that Blanchard is also the same "Dr. David Blanchard" who is listed as Vice Chairperson of World Hope International, a Christian evangelical aid group.

Blanchard's certainly entitled to his own beliefs, and World Hope International (if he's the same Blanchard) has done some good work, albeit with a proselytizing bent. But most evangelicals in this country are ardent supporters of the Bush/Cheney Administration. This may explain the otherwize puzzling word choices Dr. Blanchard made to play down Whittington's injuries, especially before the heart attack made that more difficult to do.

So was Cheney drinking, and was there anything inappropriate about this hunting party? We don't know, and nobody's investigating. There's reason to be suspicious. We do have the suggestion that drinking was taking place, we have inconsistencies and a pattern of deception in Armstrong's statements, we have a shooting injury that's far more serious than originally claimed ... and a Sheriff's Department and national press that have already proclaimed the VP innocent of all wrongdoing.

I was right to call this Cheney's Chappaquiddick. The parallels get stronger every day. Of course, Chappaquiddick happened almost forty years ago, and Ted Kennedy's turned his personal life around. Cheney's actions happened this weekend. There's reason to be suspicious of the Vice President's behavior, starting with the cover-up itself.

They're trying to spin it as just a badly handled case of press relations, but it's could be a whole lot more than that.
--------------------------------------
THIS JUST IN: The Fox News Channel (aka The Republican News Network) had a discussion on air about the Cheney "incident" and gave a hint as to how hard Fox will question Cheney in their exclusive interview today. Fox and its guest (a former Cheney aide) criticized the media for focusing too much on the condition of the victim (Whittington), and not enough on Cheney's feelings. WTF?? (via Think Progress): 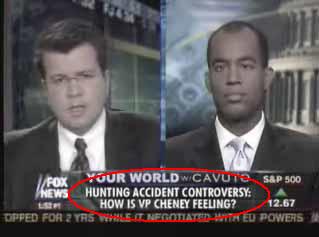