by Bill Maher (from Huffington Post)
I have to admit: part of me is glad we're seeing the cartoon riots. They serve as a great reminder of what we're up against. Plus, sometimes it's just nice to see angry Muslims burning someone else's flag for a change. And all this over a cartoon. Wait until they find out one of the Teletubbies is gay.

These riots really do remind us that, in some ways, this really is a clash of civilizations. One photo in particular caught my eye, one of a dark-skinned man holding a sign that read, "Freedom: Go to hell!" Then I realized it was Alberto Gonzalez.

But my real problem with the administration is that once the riots started they didn't even back the Danes, one of the few countries to actually join Bush's "Coalition of the Willing."  They didn't back the West. They didn't stand up for our traditions of free speech. For all the talk about how tough Bush is and how much he believes in our way of democracy all the courage they could muster up was to say, "Anti-Muslim images are as unacceptable as anti-Semitic images, as anti-Christian images or any other religious belief."  Well, I'm sorry, but that's just chickenshit. And that goes for Bill Clinton's statement as well.

Can you image Ronald Reagan giving some mealy-mouthed statement like that? He would have said, "Sorry. We believe in free speech, and that includes the freedom to critique your religion. Deal with it." Except it would have been written by Peggy Noonan and included glowing prose about crosses and flags and the human heart and made us all puke. 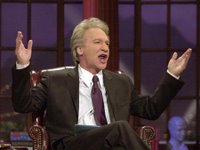 Plus, the idea that anti-Semitic and anti-Christian images are "unacceptable" isn't even true. Same goes for anti-Muslim images, or my personal favorite, anti-Scientologist. Anti-religious images can be offensive, repugnant, amusing, illuminating, ridiculous, a slap-happy good time, or even funded by the NEA. But they're never "unacceptable".  This is the West. We accept. And the last time I checked, our way works better.
---------------------------
I agree with Bill, obviously. I was surprised that the US didn't stand up for the Danes or for freedom of the press or speech. But, the Bush Administration has little use for freedom of speech (unless you agree with them), so it is not too surprising. Bill's new season of Real Time starts this Friday!!
Posted by Dave Splash