Yes, I Caught the Season Premiere of '24'

Though I'm still in the middle of watching Season Four, as anyone who watches television knows, Season Five of 24 began last night (Sunday Jan. 15). Fortunately, with a show like 24, you don't have to have seen the previous season to get into the show. But if you want to have any prayer of following the ultra-fast paced plot of the show, you better start with the first episode of any of the seasons.

Show devotees will see a strange similarity between the beginning of the new season and the first one. At the very beginning of the show, David Palmer (then a Senator running for President) was the target of an assassination attempt. The people that wanted to kill Palmer, then wanted to frame CTU Agent Jack Bauer for the murder.

Palmer was not killed, obviously, and later became President. Bauer was cleared. Fast forward a few years, a few seasons, and few more terrorist attacks, and we are now in the present. To almost all of the outside world, Bauer is now dead. We have a different President -- Charles Logan -- but the world is still under a seemingly constant threat of international terrorism.

Last night's season premiere began with former President Palmer being assassinated for real. The people who carried out the assassination wanted to frame none other than the "deceased" superagent, Jack Bauer. Who would try and frame a dead guy and why? Those seem to be the big mysteries at the beginning of this season. 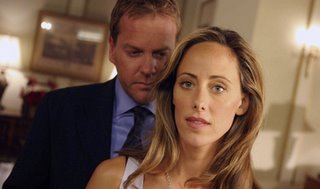 The show came under some fire last season because the terrorists were Arab Muslims. Hardly seems like something to be up-in-arms about for a show dealing with terrorism. In the other seasons of the show, the villains were Serbian, South American, and American. Is it so outrageous to do a season where the terrorist villains are Muslims? It's not as if there has never been an act of Islamic terrorism in the United States. Ahhh...gotta love the PC police.

Anyhow, 24's new season is being given a massive PR rollout. It is getting a two-night, four-hour premiere. I just caught the first night, and am about to watch the second one. 24 is not the type of show I usually watch (I'm not usually an "action" fan), but I am completely hooked. It's a great show -- well-written, well acted, and the story keeps you guessing throughout the season.
Posted by Dave Splash