Wow. Pretty happening weekend. Lots of rock to report on. Let's get started right away. Before Friday's Charlemagne show at Mick's, I went to a small dinner party at the apartment of a friend of a friend. The food was good, I had a few beers, and met a woman with some serious potential. I'm pretty picky about women, I admit. My impossibly high standards are rarely met (that is me being sarcastic). The woman (whose name will remain under wraps for the time being) is an artist, and has a number of paintings in some upcoming shows. I'm looking forward to seeing some of her work; and you may see me becoming a patron of the arts in the near future.

After dinner, we cruised over to Mick's to see the show. Mick's is a nice bar with a unique look and a good sound system. There aren't too many shows there that I like, so I rarely ever go there. It's pretty much an acoustic club -- folk and blues. Charlemagne is pretty mellow, but Mick's was the wrong place for them to play. In all honesty, I spent most of the set at the back of the club chatting up my new friend. The band would have had a better reception if they had played at a place like O'Leavers. They should discuss this with their agent.

Saturday night's concert experience was much better. The show's order ended up working out perfectly for me. I was pretty beat from the night before, so when I heard that Eagle*Seagull and Ghosty would be playing first and second, I was pretty happy. 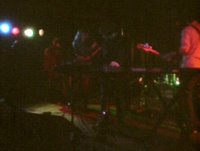 Here is my crappy cameraphone shot of Eagle*Seagull last night.
Eagle*Seagull was really good last night. They were totally able to pull off the intricacies of their arrangements in a live setting. The singer/keyboardist delivered on all the unusual vocal melodies, and the band sounded really tight. Last night's show was the beginning of a lengthy, nationwide tour. Check the band's MySpace page to see if they are playing near you.

Got a chance to speak with the bassist from Ghosty during E*S's set. Nice guy. I told him that I had been playing their record on my show, but that the band's label hadn't responded to any of my emails. He thanked me, and then said that he hears that a lot about the label. I bet they are looking for a new one (although he did not say that). Ghosty had a new EP for sale at the show, and I picked one up. Apparently, these are demos of songs that will be on the next CD -- whenever that comes out. When I told the guy how much their CD reminded me of XTC's English Settlement

he said that they had been hearing that a lot, but they did not know XTC's music. Now they have gotten a few CDs and love the band. How weird.

Ghosty was great live. I didn't realize they performed with a keyboard player. At one point the singer/guitarist and the keyboard player switched places, but there was not a time where they used two guitars. I wish they had. But that is a monor complaint. They were great as they were.

Though the members of Landing on the Moon were nice enough to give me a copy of their new CD, I was too tired to stay for their set. I'll give the CD a listen this week, and assuming it's good, will try and play it on the show. Obviously, I missed Claire De Lune as well.
Posted by Dave Splash