In the most ridiculous case of a Republican claiming they don't associate with, work with, or even know Jack Abramoff, disgraced former House Majority Leader Tom DeLay (R-TX) is now threatening to sue any TV station that airs an ad that links him to Jack Abramoff's lobbying. Jeezus Christ this guy actually believes his own bullshit! Of course, DeLay is linked to Abramoff. He's the reason Abramoff had such unprecedented access to these Republican "lawmakers." The two are thick as thieves -- literally.

Want a laugh? Click on the screenshot below to see a video featuring Abramoff giving one of the most ridiculously mushy introductions for Tom DeLay at a College Republican conference a few years ago. Here's a direct quote from Abramoff about Delay, "Never before has an individual who has been steadfast to our principles-risen as high as Tom Delay." Wow. 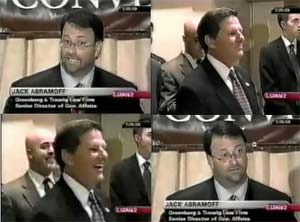 The latest on Casino Jack and the his corrupt friends in the GOP is that the Bush Justice Department may have illegally interfered with a US Attorney that subpoenaed Abramoff in 2002.
Posted by Dave Splash