Song of the Day: Riddle of Steel "This Is a House of Lies"

Riddle of Steel is a band that I just stumbled onto in the last month or so. They hail from St. Louis, and have a very unique and interesting sound. The band's hometown paper, Riverfront Times, said this about Riddle of Steel:

"...hints of Queens of the Stone Age's lumbering stoner-rock wind through the bottom-heavy riffs and the Josh Homme-esque monotone-but-melodic vocals on 'Baby Bird' and 'The Lovers of Nothing.' But elsewhere the group adds intricate fretwork that reeks of prog rock, while 'Invisible Hands' even sounds as spacey and chiming as early-'90s Britrockers Catherine Wheel -- and justifies the shout-out quintessential mopers the Smiths receive in Feelin's liner notes."

Riddle of Steel has released two albums. I have only heard the newest one, Got This Feelin'

. I played them on my radio show a few times and got a good response. Somehow, the band found out and personally sent me a thank you email. What nice guys. 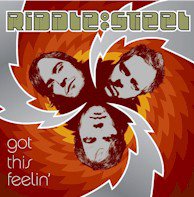 Here is an mp3 of my favorite track from their new CD, "This is a House of Lies."
Posted by Dave Splash