(from Andrew Sullivan)Far Right, Republican Senator Rick Santorum (who once equated gay sex to people having sex with dogs) said the following at a fundraiser for his re-election campaign:

“And yet we have brave men and women who are willing to step forward because they know what’s at stake. They’re willing to sacrifice their lives for this great country. What I am asking all of you tonight, is not to put on a uniform. Put on a bumper sticker. Is it that much to ask? Is it that much to ask to step up and serve your country, to fight for what we believe in."

So now Santorum is suggesting that putting a Santorum for Senate bumper sticker on your car is as much of a sacrifice as fighting in the military? I'm confused. But I'd still rather fight in the Middle East than put that asshole's sticker on my car! 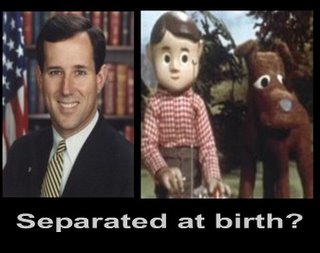