I didn't think it was possible for right-wingers to get any sleazier, or more dishonest than they did at their peak sleaze moment -- the slandering of John Kerry during the 2004 election. But just days after the President says he welcomes criticism of the Iraq War, as long it is done in a "respectful tone," one of his GOP surrogates is trying to smear Rep. John Murtha by saying he did not deserve the Purple Hearts he received in Vietnam. Sound familiar. Strangely, the Washington Post (part of the "liberal media?") failed to mention that the person making these outrageous claims works for the Republican National Committee. This is not some lone wolf out there advancing these lies, it is the Republican Party itself. Sick. I don't think conservatives are capable of honest, respectful debate. Considering how much mileage they have gotten by just smearing their opponents, I'm not sure their tactics will change.
------------------------------------------------------
(Washington Post) Rep. John P. Murtha (D-Pa.), the former Marine who is an outspoken critic of the war in Iraq, has become the latest Democrat to have his Vietnam War decorations questioned.

In a tactic reminiscent of the Swift Boat Veterans for Truth assault on Sen. John F. Kerry (D-Mass.) during the 2004 presidential campaign, a conservative Web site yesterday quoted Murtha opponents as questioning the circumstances surrounding the awarding of his two Purple Hearts.

David Thibault, editor in chief of the Cybercast News Service, said the issue of Murtha's medals from 1967 is relevant now "because the congressman has really put himself in the forefront of the antiwar movement." Thibault said: "He has been placed by the Democratic Party and antiwar activists as a spokesman against the war above reproach."

Cindy Abram, a spokeswoman for Murtha, said, "We certainly believe that the questions being raised are an attempt to distract attention from what's happening in Iraq." As for how Murtha won the Purple Hearts, she said: "We think the congressman's record is clear. We have the documentation, the paperwork that proves that he earned them, and that he is entitled to wear them proudly."

Cybercast is part of the conservative Media Research Center, run by L. Brent Bozell III, who accused some in the media of ignoring the Swift Boat charges, but Thibault said it operates independently. He said the unit, formerly called the Conservative News Service, averages 110,000 readers, mainly conservative, and provides material for other Web sites such as GOPUSA. "We won't run anything against anybody if we don't have the goods," he said.

Former representative Don Bailey (D-Pa.), who was quoted in the article, confirmed his account to The Washington Post yesterday.

In a conversation on the House floor in the early 1980s, said Bailey, who won a Silver Star and three Bronze Stars in Vietnam, Murtha told him he did not deserve his Purple Hearts. He recalled Murtha saying: "Hey, I didn't do anything like you did. I got a little scratch on the cheek." Murtha's spokeswoman would not address that account.

Bailey, who lost a House race to Murtha after a 1982 redistricting, said "Jack's a coward, and he's a liar" for subsequently denying the conversation. "That just really burned me," he said.

While saying he has only responded to reporters' questions and is not bitter toward Murtha, Bailey said the congressman's approach to Iraq is "not responsible" and that "it just turned my stomach" to see Murtha acting as a spokesman for veterans.

He said he shared the information with Republican William Choby, who ran against Murtha four times beginning in 1990 and made the Vietnam decorations an issue. Choby raised the issue again during Murtha's 2002 reelection campaign.

The Pittsburgh Post-Gazette, citing Marine records, reported that year that Murtha was wounded during "hostile" actions near Da Nang, Vietnam: "In the first incident, his right cheek was lacerated, and in the second, he was lacerated above his left eye. Neither injury required evacuation." The Cybercast article cites a 1994 interview in which Murtha described injuries to his arm and knee.

The article included a 1996 quote from Harry Fox, who worked for former representative John Saylor (R-Pa.), telling a local newspaper that Murtha was "pretending to be a big war hero." Fox, who lost a 1974 election to Murtha, said the 38-year Marine veteran had asked Saylor for assistance in obtaining the Purple Hearts but was turned down because the office believed he lacked adequate evidence of his wounds.

House Minority Leader Nancy Pelosi (D-Calif.) said, "The Swift Boat-like attacks on an American hero, Congressman Jack Murtha, are despicable and have no place in politics."

In November, when Murtha called for a U.S. withdrawal from Iraq, White House spokesman Scott McClellan said the congressman was endorsing "Michael Moore and the extreme liberal wing of the Democratic Party" and called his stance a "surrender to the terrorists." Days later, President Bush called Murtha "a fine man" and said they simply disagreed about Iraq.

The Cybercast article appeared shortly before a segment scheduled for CBS's "60 Minutes" tomorrow in which Murtha predicts that the "vast majority" of U.S. troops will be out of Iraq by year's end. 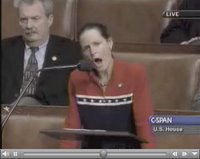 The shrillness of the right wing never ends.
Posted by Dave Splash