Osama: Still Alive and Promising Future Attacks in US 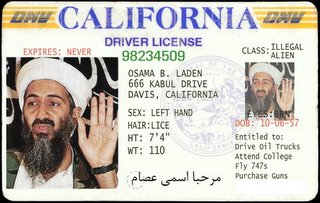 Despite the fact that the Bush Administration has been playing down the threat of Bin Laden for the last few years so they can distract the American people with the Iraq War, he is still alive and well. And he's warning of future attacks in the US. This scumbag should have been killed years ago, but of course with all of 10 soldiers in Afghanistan, it's no wonder we haven't found him yet. I'm glad the whole "fight them over there so we don't have to fight them over here" concept has worked out so well. And now that I had to Google Osama Bin Laden to get pictures of the guy, I bet the NSA is now illegally monitoring my communication. With Bush & Co in office that is all it takes for my rights to be violated. (you think I'm kidding?)But that's a whole other story...

CAIRO, Egypt (AP) - Al-Jazeera on Thursday aired an audiotape purportedly from Osama bin Laden, who says al-Qaida is making preparations for attacks in the United States but offering a truce "with fair conditions."

The tape's release came days after a U.S. airstrike in Pakistan that was targeting bin Laden's deputy, Ayman al-Zawahri, and reportedly killed four leading al-Qaida figures, including possibly al-Zawahri's son-in-law. There was no mention of the attack on the segments that were broadcast.

It was the first purported tape from the al-Qaida leader in more than a year - the longest period without a message since the Sept. 11 2001 suicide hijackings in the United States.

Al-Jazeera said the tape was recorded in the Islamic month that corresponds with December.

The speaker refers to an alleged comment by President Bush about bombing the Qatar headquarters of Al-Jazeera, which was first reported in the British press on Nov. 22.

He also refers indirectly to the July 7 bombings in London that killed 56 people and to poll numbers that showed a fall in Bush's popularity, as occurred in late 2005.

The voice on the tape said he was directing his message to the American people after polls showed that "an overwhelming majority of you want the withdrawal of American troops from Iraq but (Bush) opposed that desire."

He said insurgents were winning the conflict in Iraq and warned that security measures in the West and the United States could not prevent attacks there.

"The proof of that is the explosions you have seen in the capitals of European nations," he said "The delay in similar operations happening in America has not been because of failure to break through your security measures. The operations are under preparation and you will see them in your homes the minute they are through (with preparations), with God's permission."

The speaker did not give conditions for a truce in the excerpts aired by Al-Jazeera.

"We do not mind offering you a long-term truce with fair conditions that we adhere to," he said. "We are a nation that God has forbidden to lie and cheat. So both sides can enjoy security and stability under this truce so we can build Iraq and Afghanistan, which have been destroyed in this war.

"There is no shame in this solution, which prevents the wasting of billions of dollars that have gone to those with influence and merchants of war in America," he said.

There was no immediate confirmation of the tape's authenticity, although the voice resembled that of bin Laden's in previous messages.

The last audiotape purported to be from bin Laden was broadcast in December 2004 by Al-Jazeera. In that recording, he endorsed Abu-Musab al-Zarqawi as his deputy in Iraq and called for a boycott of Iraqi elections.

He issued numerous tapes in 2003 and 2004, calling for Muslims to attack U.S. interests and threatening attacks against the United States.

In an April 15, 2004, audiotape, he vowed revenge against the United States for Israel's assassination of Hamas founder Sheik Ahmed Yassin - and at the same time offered a truce to European countries.

Bin Laden appeared in a video released October 2004, just ahead of U.S. presidential elections, saying the United States can avoid another Sept. 11 attack if it stops threatening the security of Muslims.

Since December 2004, bin Laden's deputy in al-Qaida, al-Zawahri, has issued a number of video and audiotapes, including one claiming responsibility for the London attacks, which he said came after Europe rejected the terms of a truce al-Qaida had previously offered them.

Al-Jazeera's editor-in-chief Ahmed al-Sheik would not comment on when or where the tape was received. He said the full tape was 10 minutes long. The station aired four excerpts with what it "considered newsworthy," he said, but would not say what was on the remainder. 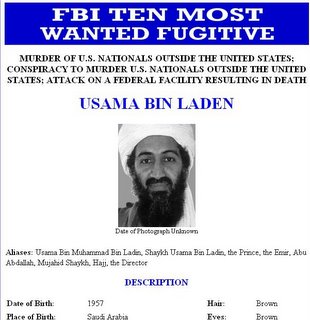