Tonight's show at Sokol Underground promises to be one of the more memorable of the year. I am most excited about seeing Ghosty. The Lawrence, KS based band has a sound that reminds me of early 80s XTC (think English Settlement

). They have a friend in Wayne Coyne of The Flaming Lips, and he appears on a track on the band's newest CD, Grow Up or Sleep In

. I have played them a number of times on my show, and am hoping they are a good live band. I'm feeling optimistic that they will be.

Also on the bill is Lincoln, NE band Eagle*Seagull. These guys are pretty interesting, and I've just begun playing them on the show. I like their new CD, but don't find myself playing it very much. It's intricate, complicated pop music; and I guess I need to be in the right mood. In a live setting, this kind of music could go either way. But, again, I'm feeling optimistic.

From what I understand, Claire De Lune will be the headliner of the show. The rest of the order is TBD. Tickets are $7 at the door. 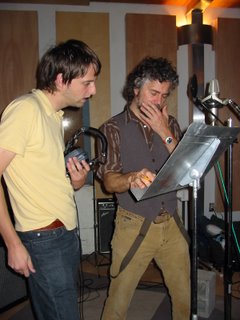 A dude from Ghosty and Wayne Coyne
Posted by Dave Splash