I want to preface this review of the new KISS DVD by saying that this should have been recorded on the band's initial reunion tour (96-97). I'm sure the band filmed numerous shows from that tour, so why no DVD from that tour? That is one of those questions that obsessive KISS fans (such as myself) will debate over and over.

Setting that issue aside, what we have here now is KISS' second full-length concert video release (the first was 1984's Animalize Live

was recorded over two nights in the summer of 2004. The DVD is of high quality. The filming, sound, and performance are all quite good. The problem with this DVD is the band itself. It's not really KISS. Band leaders Gene Simmons and Paul Stanley have dismissed both Ace Frehley (guitar) and Peter Criss (drums), and replaced them with younger, more obedient imitations.

It is not as if KISS has never replaced members before. They have. Throughout the 1980s and early 90s, KISS featured a number of players besides Frehley and Criss. The difference between then and now is that throughout the 80s and 90s, any "replacement" members of the band had their own identity, and did not simply pretend to be the guy they replaced. Nowadays, that is exactly what they are doing. They use their own names, but they wear the make-up and costumes of the band member they are replacing. In addition, they do not even attempt to add their own musical inflection to any of the songs, they simply mimic the guitar licks and drum fills of the original members. They do it well, but so do many of the guys in KISS tribute bands playing in bars all across the country. If I'm paying to see KISS, I want to see KISS. It's that simple. The band seems to be walking a fine line now between being the legitimate legendary band they were, and a cover or tribute band just doing a "KISS-like" show. With all of that commentary out of the way, let me tell you about the DVD as it is -- not the way I wish it was. 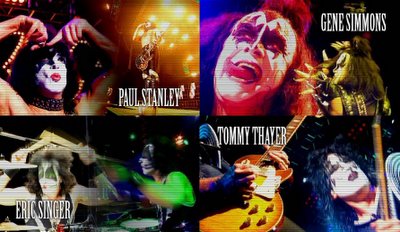 KISS Rock the Nation Live is a two-disc set that features the band performing songs from most of its catalog. A common complaint about the band's initial reunion tours was that they played nothing newer than songs from 1977's Love Gun

album. Over the course of the three reunion tours, this changed slightly, but was still not very inclusive of much of the bands output. Simmons and Stanley claimed this was because Ace and Peter didn't want to learn and play songs from albums they didn't perform on. Whatever the reason, it is nice that now the band is willing to play 80s songs like "Tears Are Falling" and "I Love It Loud," 90s songs like "Unholy," and more obscure 70s album cuts like "Love Her All I Can" and "Parasite." 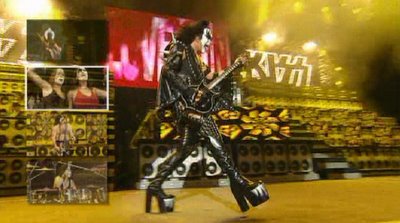 The production values on this DVD are pretty high. About half of the show is available in what the band calls "KISS Powervision." Powervision gives you the choice of choosing which band member to watch during that song. The screen capture above shows Gene Simmons with this enhancement. 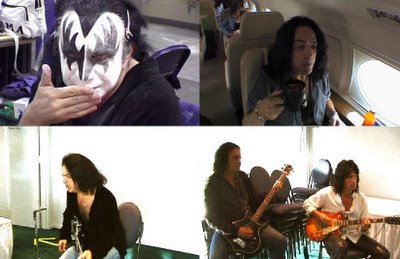 Mixed in between the songs are a number of backstage and behind-the-scenes segments. You can see the band putting on its make-up, hanging out on its private jet, or rehearsing before a show. There are also some snippets from the band's Australian theatre tour. While I kind of like segments like this, the appeal is diminished since half of the band are just hired hands. There's a lot of great footage of the original band on its Second Coming

DVD. That is a great disc, but it is more of a documentary on the band getting back together. 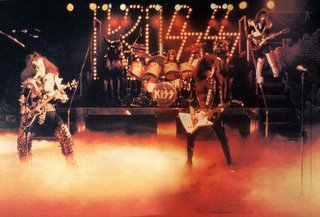 The original KISS (1976)
You should only buy this DVD if you are a KISS completist. If you are a casual fan, there are a number of better DVDs that feature footage of the original band. Those should be sought out first. I am of the opinion that KISS should have retired after their "Farewell Tour" in 2000, and I have not seen them since that time -- on purpose. Nothing on this DVD has made me re-think that decision. Still, KISS puts on an impressive show no matter who is in the band, and this is a very well produced disc.