I've decided to come clean and admit that I like watching the show Numb3rs. I watched it last season, and it was decent. The show is based on a pretty original idea (rare in television), and the acting is pretty good. Essentially, the show is about an FBI agent who has a math genius for a younger brother. The brother can somehow pour through all the evidence in the case, come up with some equation based on that evidence, and use math to narrow down the suspects or even find the guilty party. I think all the theories the math guy comes up with are all bullshit, but they sound real enough. It adds a new twist to what is, basically, another cop show.

For the show's second season they did a little shake-up in the cast. They added two new agents. The one that I am most impressed with is Diane Farr who plays "Agent Megan Reeves". Farr is way too hot to be an FBI agent; but she was also way too hot to be a firefighter (Rescue Me), Drew Carey's girlfriend (Drew Carey Show), or a shrink (Love Line). 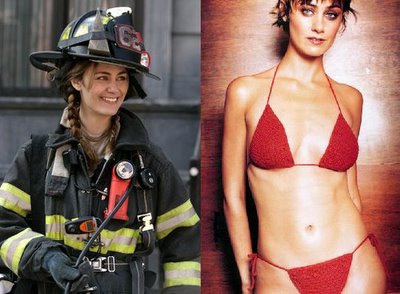 She is a major improvement to the show.
Posted by Dave Splash