I just read at Punk Music that actor Elijah Wood (Lord of the Rings) has been cast to play Iggy Pop in a new biopic film scheduled to shoot sometime this year. I'm not too excited about this casting choice, but when talking to a friend of mine, I wasn't able to think of someone I would like better to play Iggy. So, Elijah Wood it is. He said about the role, "I'm scared to death of doing it, because I love him (Iggy Pop) so much and I respect the music so much. I don't want to be the person responsible for screwing that up." 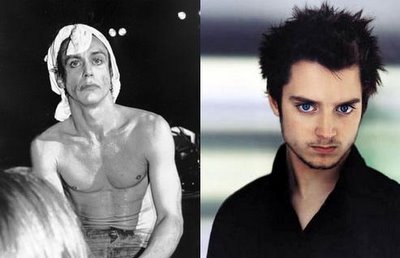 Here is a video I found of Iggy back in 1977 performing "The Passenger."

not very happy bout it either!!! Elijah wood is cute,no matter who he plays!!!

Apparently Iggy isn't thrille with Elijah Wood playing him - he won't have anything to do with production of the film.