The Concerned Alumni of Princeton, Lying, and Crocodile Tears

The right wing is going ballistic because Democrats on the Senate Judiciary Committee are asking questions to Supreme Court nominee Sam Alito about a "club" he belonged to after graduating from Princeton University. The club was called Concerned Alumni of Princeton. What were these folks "concerned" about? They were concerned that non-whites and women were being allowed to attend the university.

The right is whining about this unfair "attack" on Alito. How does some club that Alito may or may not have been involved in 20 years ago matter today? Well, first off, Democratic Senator Robert Byrd was a member of the KKK in the 1950s, and the right still brings that up every time his name is mentioned. Secondly, Alito was proud of his membership to CAP and put it on his job application to join the Reagan Justice Department. But now, in 2006, Alito said that he "can't recall" any racial element or sexist element in the club. He said he joined CAP because he was upset the university has disbanded the ROTC. Huh? Can't recall huh? 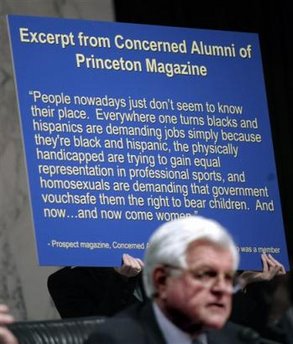 (pic from Huffington Post)
"People nowadays just don't seem to know their place. Everywhere one turns black and hispanics are demanding jobs simply because they're black and hispanic, the physically handicapped are trying to gain equal representation in professional sports, and homosexuals are demanding that government vouchsafe them the right to bear children. And now... and now come women." -- Concerned Alumni of Princeton statement.

Where is the mention of the ROTC? Seems to me that the CAP is just an Ivy League KKK. Is this the caliber of man that we should have on our US Supreme Court? I think not. And Alito's wife's crying does not make me change my position. Tough it up, lady. This is the big leagues. There's no crying in the Supreme Court!
Posted by Dave Splash