A Bi-Partisan Scandal? No Way, Jose! It's All Republican

Here are a few select quotes regarding Republican sleaze merchant/ lobbyist Jack Abramoff and his close ties to the GOP and the Bush Administration. Remember, this is a Republican scandal. Do not buy into any of the spin coming from the RNC, Fox News, or Rush Limbaugh that says it is bi-partisan. (There are more quotes at Whiskey Bar)

"If a Republican era began in 1994, Jack Abramoff is K Street's future . . . Abramoff has given himself the tough task of advancing the goals of the conservative revolution while also making money. 'They agreed that I could work on things that were important to me,' Abramoff said." -- National Journal, July 29, 1995

"Lobbyist Jack Abramoff and his book of lucrative clients and GOP connections are leaving Preston Gates Ellis and Rouvelas Meeds 12/31 to join Greenberg Traurig. Abramoff, a member of the kitchen cabinet of House Maj. Whip Tom DeLay (R-TX), plans to bring about 10 lobbyists with him . . . Greenberg Traurig nat'l gov't chair Fred Baggett: 'We're heavy into substance lobbyists. Jack is heavy into the relationship side.'" -- Hotline, December 14, 2000

"It's being dubbed the "battle of the Republican uber-lobbyists," pitting Haley Barbour, once the face of the GOP, and quiet Jack Abramoff, his biggest competitor. The jockeying for the top spot kicked into high gear this month when Abramoff helped open the posh Signatures restaurant, down the street from Barbour & Co.'s Caucus Room. This place is hot -- and booked with GOP fundraisers . . . Also, Abramoff's lobbying team just beat Barbour's over an Indian casino issue in Louisiana. What's more, he's a big pal of Rep. Tom DeLay, the likely next House majority leader. 'He's the face of the new generation,' says an ally." -- US News and World Report, March 25, 2002

"No tribe spends more--or more effectively--than Mississippi's Choctaw . . . Most of the money has gone to one of the capital's premier lobbyists, Jack Abramoff, a top Republican Party fund raiser. It was money well spent. In the 1997 legislative caper, Thad Cochran, Mississippi's five-term Republican Senator, slipped into a 40,000-word appropriations bill a 19-word sentence that exempts the tribe from oversight by the National Indian Gaming Commission." -- Time, December 23, 2002

"In a business built on relationships, Abramoff has more than two decades of involvement in Republican politics to draw on. . . . With the Republicans now in control of the White House, House and Senate, and his friend Tom DeLay (R-Texas) controlling the House agenda, Abramoff does not have to look far to find clients interested in his services." -- The Hill, March 26, 2003 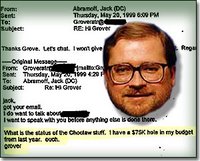 "Everyone in town is trying to be a Pioneer or Ranger. But the only way to do it is to have contacts outside of D.C., which fortunately I do. So far I've raised about $120,000, and I haven't even really started making calls." -- Jack Abramoff, as quoted in New York Times, July 21, 2003