Something to Think About: What is Considered Wartime? 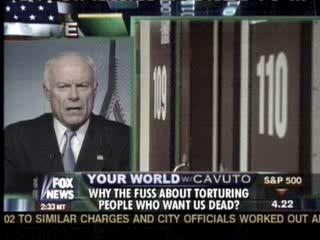 Bill Kristol and Gary Schmitt support this assessment in the Washington Post today, and they've been joined by a small army of other commentators.

Of course, their argument is not that the president has the inherent power to authorize domestic surveillance anytime he wants, only that he has that power during wartime. And as near as I can tell, that's the elephant in the room that no one is really very anxious to discuss: What is "wartime"? Is George Bush really a "wartime president," as he's so fond of calling himself? Conservatives take it for granted that he is, while liberals tend to avoid the subject entirely for fear of being thought unserious about the War on Terror. But it's something that ought be brought up and discussed openly.

Consider a different war, for example. It's safe to say that whatever Bush's NSA program actually involves, no one would have batted an eyelash if FDR had approved a similar program during World War II. Experience suggests that during a period of genuine, all-out war, few people complain when a president pushes the boundaries of the law based on military necessity. But aside from World War II, what else counts as wartime?(read the rest)
Posted by Dave Splash