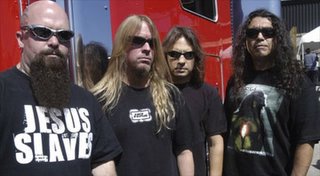 According to Punkbands.com, Slayer is considering writing a song about 9/11 for the band's next album. The twist? They intend to write the song from the terrorists' perspective! Before getting up-in-arms about the idea, remember that Slayer's music is essentially the aural equivalent of a slasher film. They have written songs from the "perspective" of serial killers, Nazis, and numerous other horrible people. Here is the money quote from guitarist Kerry King: "We're SLAYER dude, we have to be dangerous."
----------------------------------------
Slayer's last release, God Hates Us All was released on 9/11/01.
Posted by Dave Splash