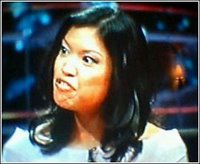 More hypocrisy from the right wing this week (you'd think they'd stop over the holiday season). Now it comes in the form of all the "outrage" over the revelation that the Bush Administration has been conducting an illegal domestic surveillance campaign. The right is not outraged by this deliberate violation of US law. They are upset about the fact that this information was made public.

In her posting "How To Stop Dangerous Press Leaks," right wing blowhard Michelle Malkin (rapidly becoming as insane as Ann Coulter) whines on and on about so-called "illegal" leaks regarding Bush's spying on Americans. Not one comment on the policy that was leaked, or its violation of the 4th Amendment of the US Constitution (which is still in effect despite 9/11). Malkin did not give a shit that a valuable CIA operative (who specializes in WMD in the Middle East) with a 20+ year career of service had her work and career destroyed. Many current CIA operations in the Middle East were compromised because her identity being revealed. The fact that the Bush Administration intentionally leaked Valerie Plame's undercover identity and risked our national security in the name of retribution, means absolutely nothing to right wingers like Malkin.

When a leak reveals illegal activity by the administration, Malkin and the rest of the whiny right want action...against the leakers, not the administration. Here is her plan of attack:
1. Strengthen collective spine.
2. Subpoena reporters.
3. Find the leakers.
4. Prosecute the lawbreakers.

Again, where was all the "outrage" over Plame? Nowhere. At least be consistent.

I guess Michelle Malkin is another right winger that is perfectly willing to give up her Constitutional rights to advance the Bush agenda. I am not. If one supports Bush's warrantless wiretapping on Americans, then he or she is voluntarily giving up one's rights. I won't give up my rights without a fight, and I want whistle-blowers to reveal government wrongdoing NOT hide that wrongdoing. Malkin and her ilk think freedom and security are synonymous with losing one's rights. I think the opposite.