The Iraq/Al Queda Connection = Lie Since 2002 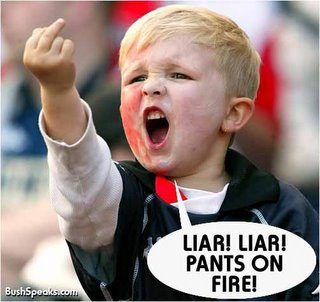 Just like those of us on the left have been saying for years, the Bush Administration simply used 9/11 as their excuse to attack Iraq. There never was any connection between Iraq and 9/11, and Bush, Cheney, Rumsfield, Rice, Libby, et al have known this all along. They used the nation's understandable anger about 9/11 and used it for their political gain. They should all be tried. What's that you say, right winger? Proof? OK:
----------------------------------------------------------
2002 Report Doubted Iraq-Al Queda Informer
Washington -- A top operative of al Qaeda in American custody was identified as a likely fabricator months before the Bush administration began to use his statements as the foundation for its claims that Iraq had trained al Qaeda members to use biological and chemical weapons, according to newly declassified portions of a Defense Intelligence Agency document.

The intelligence report from February 2002 said it was probable that the prisoner, Ibn al-Shaykh al-Libi, "was intentionally misleading the debriefers" in making allegations about Iraqi support for al Qaeda's work with illicit weapons.

The document provides the earliest and strongest indication of doubts voiced by U.S. intelligence agencies about Libi's credibility. Without mentioning him by name, President Bush, Vice President Dick Cheney, then-Secretary of State Colin Powell and other administration officials repeatedly cited Libi's information as "credible" evidence that Iraq was training al Qaeda members in the use of explosives and illicit weapons.

Among the first and most prominent assertions was one by Bush, who said in a major speech in Cincinnati in October 2002: "We've learned that Iraq has trained al Qaeda members in bomb-making and poisons and gases."

The newly declassified portions of the document were made available by Sen. Carl Levin of Michigan, top Democrat on the Senate Armed Services Committee.

Levin said the new evidence of early doubts about Libi's statements dramatized what he called the Bush administration's misuse of intelligence to try to justify an invasion of Iraq. That is an issue that Levin and other Democratic senators have been seeking to emphasize in recent days, in part by calling attention to the fact that the Republican-led Senate Intelligence Committee has yet to deliver a promised report, first sought more than two years ago, that was to have focused on the use of prewar intelligence.

A White House spokeswoman said she had no immediate comment on the Defense Intelligence Agency's report on Libi. GOP senators have been arguing that Republicans were not alone in making prewar assertions about Iraq, illicit weapons and terrorism that have since been discredited.

Libi, who was captured in Pakistan at the end of 2001, recanted his claims in January 2004. That prompted the CIA, a month later, to recall all intelligence reports based on his statements, a fact that was recorded in a footnote to the report issued by the Sept. 11 commission later in 2004.

Libi was not alone among intelligence sources later determined to have been fabricating accounts. Among others, an Iraqi exile whose code name was Curveball was the primary source for what proved to be false information about Iraq and mobile biological weapons labs. And American military officials cultivated ties with Ahmad Chalabi -- head of the Iraqi National Congress, an exile group -- who has been accused of feeding the Pentagon misleading information in urging war. (Read more).
Posted by Dave Splash