Happy Iraqis Ask the US When They are Leaving 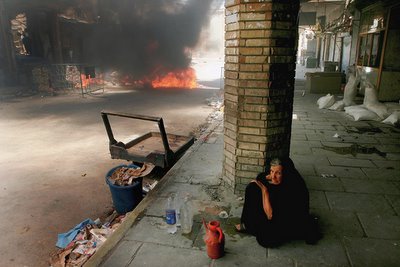 (AP) Iraqi leaders at a reconciliation conference reached out to the Sunni Arab community by calling for a timetable for the withdrawal of U.S.-led forces and saying the country's opposition had a "legitimate right" of resistance.

A day after the communique was finalized by Iraqi Shiite, Kurdish and Sunni leaders, Washington reiterated Tuesday that the United States would stay only as long as it takes to stabilize Iraq.

The communique condemned terrorism but was a clear acknowledgment of the Sunni position that insurgents should not be labeled as terrorists if they don't target innocent civilians or institutions that provide for the welfare of Iraqis.

The leaders agreed on "calling for the withdrawal of foreign troops according to a timetable, through putting in place an immediate national program to rebuild the armed forces ... control the borders and the security situation" and end terror attacks.

The preparatory reconciliation conference, held under the auspices of the Arab League, was attended by Iraqi President Jalal Talabani and Iraqi Shiite and Kurdish lawmakers as well as leading Sunni politicians.

Sunni leaders have been pressing the Shiite-majority government to agree to a timetable for the withdrawal of all foreign troops. The statement recognized that goal, but did not lay down a specific time — reflecting instead the government's stance that Iraqi security forces must be built up first.

On Monday, Iraqi Interior Minister Bayan Jabr suggested U.S.-led forces should be able to leave Iraq by the end of next year, saying the one-year extension of the mandate for the multinational force in Iraq by the U.N. Security Council this month could be the last (read more)

Question for Republicans. Are the Iraqi leaders who are asking for a timetable for withdrawal of US troops cowards?