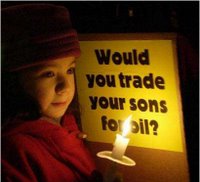 The following article was written by Martin van Creveld who is a professor of military history at Hebrew University. He is also the only non-American writer who is on the required reading list for U.S. Army officers. This article should give every American a lot to think about. You sheep on the right will probably dismiss this as you always do, but that would be a shame. If this doesn't make you re-think your idol worship of George W. Bush, then you are beyond hope. I think it is beyond debate that the Iraq War was a mistake, and that George Bush will be viewed by history as, perhaps, our nation's worst ever President. How sad.
----------------------------------
Costly Withdrawal Is the Price To Be Paid for a Foolish War
By Martin van Creveld November 25, 2005

The number of American casualties in Iraq is now well more than 2,000, and there is no end in sight. Some two-thirds of Americans, according to the polls, believe the war to have been a mistake. And congressional elections are just around the corner.

What had to come, has come. The question is no longer if American forces will be withdrawn, but how soon — and at what cost. In this respect, as in so many others, the obvious parallel to Iraq is Vietnam.

Confronted by a demoralized army on the battlefield and by growing opposition at home, in 1969 the Nixon administration started withdrawing most of its troops in order to facilitate what it called the "Vietnamization" of the country. The rest of America's forces were pulled out after Secretary of State Henry Kissinger negotiated a "peace settlement" with Hanoi. As the troops withdrew, they left most of their equipment to the Army of the Republic of South Vietnam — which just two years later, after the fall of Saigon, lost all of it to the communists.

Clearly this is not a pleasant model to follow, but no other alternative appears in sight.

Whereas North Vietnam at least had a government with which it was possible to arrange a cease-fire, in Iraq the opponent consists of shadowy groups of terrorists with no central organization or command authority. And whereas in the early 1970s equipment was still relatively plentiful, today's armed forces are the products of a technology-driven revolution in military affairs. Whether that revolution has contributed to anything besides America's national debt is open to debate. What is beyond question, though, is that the new weapons are so few and so expensive that even the world's largest and richest power can afford only to field a relative handful of them.

Therefore, simply abandoning equipment or handing it over to the Iraqis, as was done in Vietnam, is simply not an option. And even if it were, the new Iraqi army is by all accounts much weaker, less skilled, less cohesive and less loyal to its government than even the South Vietnamese army was. For all intents and purposes, Washington might just as well hand over its weapons directly to Abu Musab al-Zarqawi.

Clearly, then, the thing to do is to forget about face-saving and conduct a classic withdrawal.

Handing over their bases or demolishing them if necessary, American forces will have to fall back on Baghdad. From Baghdad they will have to make their way to the southern port city of Basra, and from there back to Kuwait, where the whole misguided adventure began. When Prime Minister Ehud Barak pulled Israel out of Lebanon in 2000, the military was able to carry out the operation in a single night without incurring any casualties. That, however, is not how things will happen in Iraq.

Not only are American forces perhaps 30 times larger, but so is the country they have to traverse. A withdrawal probably will require several months and incur a sizable number of casualties. As the pullout proceeds, Iraq almost certainly will sink into an all-out civil war from which it will take the country a long time to emerge — if, indeed, it can do so at all. All this is inevitable and will take place whether George W. Bush, Dick Cheney, Donald Rumsfeld and Condoleezza Rice like it or not.

Having been thoroughly devastated by two wars with the United States and a decade of economic sanctions, decades will pass before Iraq can endanger its neighbors again. Yet a complete American withdrawal is not an option; the region, with its vast oil reserves, is simply too important for that. A continued military presence, made up of air, sea and a moderate number of ground forces, will be needed.

First and foremost, such a presence will be needed to counter Iran, which for two decades now has seen the United States as "the Great Satan." Tehran is certain to emerge as the biggest winner from the war — a winner that in the not too distant future is likely to add nuclear warheads to the missiles it already has. In the past, Tehran has often threatened the Gulf States. Now that Iraq is gone, it is hard to see how anybody except the United States can keep the Gulf States, and their oil, out of the mullahs' clutches.

A continued American military presence will be needed also, because a divided, chaotic, government-less Iraq is very likely to become a hornets' nest. From it, a hundred mini-Zarqawis will spread all over the Middle East, conducting acts of sabotage and seeking to overthrow governments in Allah's name.

The Gulf States apart, the most vulnerable country is Jordan, as evidenced by the recent attacks in Amman. However, Turkey, Egypt and, to a lesser extent, Israel are also likely to feel the impact. Some of these countries, Jordan in particular, are going to require American assistance.

Maintaining an American security presence in the region, not to mention withdrawing forces from Iraq, will involve many complicated problems, military as well as political. Such an endeavor, one would hope, will be handled by a team different from — and more competent than — the one presently in charge of the White House and Pentagon.

For misleading the American people, and launching the most foolish war since Emperor Augustus in 9 B.C sent his legions into Germany and lost them, Bush deserves to be impeached and, once he has been removed from office, put on trial along with the rest of the president's men. If convicted, they'll have plenty of time to mull over their sins.
Posted by Dave Splash