Bright Eyes and Spoon TONIGHT at the Orpheum Theater 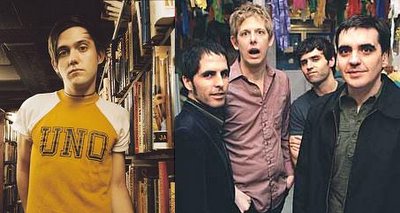 Tonight's the big night, folks. Bright Eyes will be performing for the first time at the Orpheum Theater, along with Spoon, David Dondero, and Willy Mason. I know nothing about the first two artists, other than that they are the bands Conor Oberst (Bright Eyes) selected to be his openers for this entire tour. For tonight's show only, Austin, Texas' Spoon will also be playing. That makes this quite a unique and impressive bill.

Bright Eyes is, of course, from Omaha, but Conor pretty much lives on the road or in NYC these days. It's not much of a homecoming since they have already played here three times this year. Spoon used to be an Omaha staple (they did a single on Saddle Creek and singer Brit Daniels did a record with Conor a few years ago), but haven't played in town for a couple of years. I'm actually looking forward to seeing Spoon much more than B.E. just because I see them much less frequently. If you don't already have a ticket, you are S.O.L. -- it's SOLD OUT. The Orpheum is a beautiful, old theater and should make for a nice setting to see this show. See ya there!!