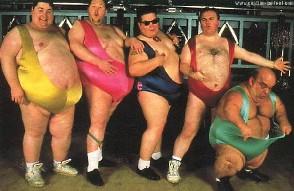 This is a rarity here, folks. I actually support something that the GOP controlled House of Representatives is doing. They have passed a bill that prohibits lawsuits against the fast food industry for obesity-related issues. For the last 10 years, the GOP House has done nothing (seriously) of any merit. They have simply done the bidding of the banking and oil industries, the Christian Right, and other narrow interest groups. However, fat people should not be suing fast food restaurants over their obesity. This actually is a personal responsibilty issue. So, in the same way that a stopped clock has the right time two times in a day, the GOP House is right on this one issue. And they didn't need Tom DeLay to get it passed!

Oct. 19, 2005 -- Overweight Americans who blame fast food restaurants for causing their obesity won't get their day in court if the U.S. House of Representatives gets its way.

House lawmakers on Wednesday passed a bill banning obesity-related lawsuits against restaurants and food manufacturers. More than 20 states already have such laws on the books.

Supporters said the bill was intended to prioritize personal responsibility among an increasingly obese American population.

"The bill seeks to block lawsuits by people because they ate too much and got fat," says Rep. Chris Cannon (R-Utah), one of the bill's sponsors.

"We should not encourage lawsuits that blame others for our own choices and could bankrupt an entire industry," notes Rep. Lamar Smith (R-Texas).

Still, there is little evidence that obesity lawsuits are threatening the food and restaurant industry. Only a handful of cases blaming restaurant food or advertising for obesity have ever been filed, and only one major case remains open.

I bet that fat ass James Sensenbrenner objected to this bill!
Posted by Dave Splash