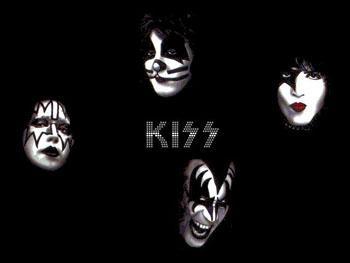 Whether or not you are a KISS fan, I think it should go without saying that they deserve to be in the Rock N Roll Hall of Fame. KISS has the most gold records of any group in rock history, they are one of the most influential groups in all of rock (influence on Lenny Kravitz, Motley Crue, Nirvana, Garth Brooks, Soundgarden, Misfits, and countless others) and when the original line-up reunited 22 years after forming, the tour was the most successful of the year. Let's just recap some of their more famous songs: "Rock n Roll All Nite" "Detroit Rock City" "Beth" "Calling Dr. Love" "Hotter Than Hell" "Hard Luck Woman" "Love Gun" "I Was Made For Loving You" "I Love It Loud" "Forever" "Lick It Up" "Heavens On Fire" "Domino" and many more. There is absolutely no reason why they are not in the Hall of Fame, except for some bias against them.

In order to qualify for the Hall, it has to be 25 years after your debut album was released. KISS' debut was released in Feb. 1974, so they have been eligible since 1999. Let's see which "questionable" artists got in from 1999-2005 that beat out KISS: 99-Billy Joel, The Staple Singers, George Martin (Beatles' producer), 2000-Lovin' Spoonful, The Moonglows, Scotty Moore (Elvis' drummer), 2001-The Flamingos, Michael Jackson, Chris Blackwell (founder of Island Records), 2002-Isaac Hayes, Brenda Lee, 2003-Righteous Brothers, 2004-Jackson Browne, The Dells, Bob Seger, Jann Wenner (founder of Rolling Stone magazine), 2005-The O'Jays, Percy Sledge, U2, Seymour Stein (founder of Sire Records).

Plans for a protest rally at the Rock and Roll Hall of Fame continue after fans of the iconic rock group KISS received a letter from Hall Of Fame president Terry Stewart.

"Unacceptable!" says Joe Apple, who initiated contact with the Hall by requesting an explanation for KISS's absence on the ballot for Hall Of Fame induction. Apple is not only a fan, but the chair of the rally planned for August 5, 2006 at the Rock and Roll Hall of Fame Museum in Cleveland, Ohio.

"We have no intention of backing down," he asserts.

"They really missed the point," agrees rally co-chair Paul Carpenter. Among other things, Stewart told us that ‘candidates are reviewed and discussed relative to their impact on this music that we broadly call rock and roll.'

What the Hall establishment fails to acknowledge is not just KISS' impact on music, but on rock and roll itself. KISS not only created a musical spectacle, but a culture. For much of the world, the word ‘KISS' is synonymous with the phrase ‘rock and roll.' KISS reset the bar for other artists when they stormed into the ‘70s. Three decades later, their influence on show business is everywhere."

Apple and Carpenter have received support for the protest rally from all over the world. "The outreach from fans, performers and volunteers is exactly what we expectedˆgenerous and enthusiastic," Apple says. "We can't wait until August."

Information about the rally is available at http://www.geocities.com/KISSHallofFame

Volunteers for the event can sign up to participate at http://groups.yahoo.com/group/Marchontherockandrollhalloffame