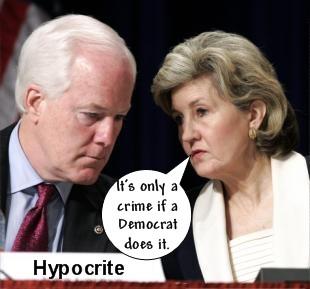 Not a single person on the right has called out the GOP on its hypocrisy. Sen. Kay Bailey Hutchison (R-TX), who owes her entire political career to the Bush family, is the most brazen hypocrite of them all. She is hardly the only one. For the next couple of weeks, I will try to post every time a Republican says that perjury or obstruction of justice are "technicalities" that should not be prosecuted -- like Hutchison stated on Meet The Press last Sunday. Here's some more quotes from Hutchison that expose her disturbing double standard:

NOW: "I certainly hope that if there is going to be an indictment . . . that it is an indictment on a crime and not some perjury technicality where they couldn't indict on the crime and so they go to something just to show that their two years of investigation was not a waste of time and taxpayer dollars. So they go to something that trips someone up because they said something in the first grand jury and then maybe they found new information or they forgot something and they tried to correct that in a second grand jury.

"I think we should be very careful here, especially as we are dealing with something very public and people's lives in the public arena." - October 23, 2005
VS
Posted by Dave Splash