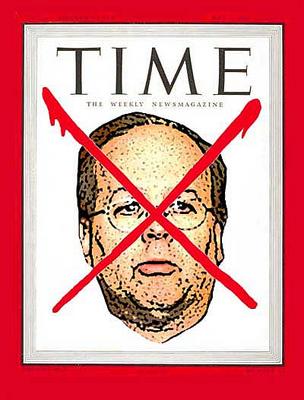 White House Deputy Chief of Staff Karl Rove personally assured President Bush in the early fall of 2003 that he had not disclosed to anyone in the press that Valerie Plame, the wife of an administration critic, was a CIA employee, according to legal sources with firsthand knowledge of the accounts that both Rove and Bush independently provided to federal prosecutors.


If Rove purposely misled the president, the FBI, or the White House press secretary, a reasonable prosecutor might construe such acts as 'overt acts in furtherance of a criminal plan.'

During the same conversation in the White House two years ago-occurring just days after the Justice Department launched a criminal probe into the unmasking of Plame as a covert agency operative-Rove also assured the president that he had not leaked any information to the media in an effort to discredit Plame's husband, former ambassador Joe Wilson. Rove also did not tell the president about his July 2003 a phone call with Time magazine reporter Matthew Cooper, a conversation that touched on the issue of Wilson and Plame.

But some 22 months later, Cooper's testimony to the federal grand jury investigating the Plame leak has directly contradicted Rove's assertions to the president. Cooper has testified that Rove was the person who first told him that Wilson's wife worked for the CIA, although Rove did not name her. Cooper has also testified that Rove told him that Plame helped arrange for Wilson to make a fact-finding trip for the CIA to the African nation of Niger to investigate allegations that then-Iraqi leader Saddam Hussein was trying to buy uranium with which to build a nuclear bomb.

In his first interview with FBI agents working on the leak probe, Rove similarly did not disclose that he had spoken to Cooper, according to sources close to the investigation,

But in subsequent interviews with federal investigators and in his testimony to the grand jury, Rove changed his account, asserting that when the FBI first questioned him, he had simply forgotten about his phone conversation with Cooper. Rove also told prosecutors that he had forgotten about the Cooper conversation when he talked to the president about the matter in the fall of 2003.

In his own interview with prosecutors on June 24, 2004, Bush testified that Rove assured him he had not disclosed Plame as a CIA employee and had said nothing to the press to discredit Wilson, according to sources familiar with the president's interview. Bush said that Rove never mentioned the conversation with Cooper. James E. Sharp, Bush's private attorney, who was present at the president's interview with prosecutors, declined to comment for this story.

Sources close to the leak investigation being run by Special Prosecutor Patrick J. Fitzgerald say it was the discovery of one of Rove's White House e-mails-in which the senior Bush adviser referred to his July 2003 conversation with Cooper-that prompted Rove to contact prosecutors and to revise his account to include the Cooper conversation.

The new disclosures concerning Rove's personal assurances to the president about Plame arise as Fitzgerald is concluding his investigation and the federal grand jury is making final decisions on whether to bring charges against Rove; against I. Lewis (Scooter) Libby, the chief of staff to Vice President Cheney; or against others, in regard to the disclosure of Plame's covert status at the CIA.

Rove on Thursday agreed to appear a fourth time before the federal grand jury, as federal prosecutors warned him that they could not guarantee that he would not be criminally charged, according to sources familiar with the investigation.

According to outside legal experts, it is rare for prosecutors to seek to question a witness before the grand jury so late in the course of a high-profile investigation and after the witness has already testified three times, unless criminal charges are being considered.

Sources close to the Fitzgerald investigation say that Rove's personal assurances to the president and his initial interview with the FBI are central to whether the grand jury might charge Rove with making false statements to investigators or with obstruction of justice.