Iran's New President Says Israel 'Must Be Wiped Off the Map' 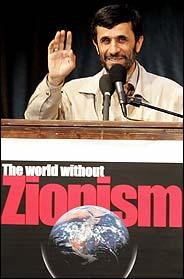 Here is yet another example of why the Iraq War was so miguided. Iraq was contained, and was a threat to no one. It is IRAN and Saudi Arabia that are the sources of international terrorism. Now the newly elected President of Iran calls for the destruction of Israel (our ally), and he was one of the kidnappers of our diplomats back in the 70s! We are so bogged down on Bush's Iraqi excursion, that we are unable to do anything about Iran. So we'll ignore the real problem and continue to fight in Viet...I mean, Iraq.

He was speaking to about 4,000 students at a program called "The World Without Zionism," in preparation for an annual anti-Israel demonstration held on the last Friday of the holy month of Ramadan.

His tone was reminiscent of that of the early days of Iran's Islamic revolution in 1979. Iran and Israel have been bitter enemies since then, and anti-Israel slogans have been common at rallies.

Senior officials had avoided provocative language in the last decade, but Mr. Ahmadinejad appears to be taking a more confrontational tone than have recent Iranian leaders.

He said on Wednesday that the issue of a Palestinian state would be resolved only when Palestinians took control of all their lands.

"The establishment of a Zionist regime was a move by the world oppressor against the Islamic world," the news agency reported him as saying. "The skirmishes in the occupied land are part of the war of destiny. The outcome of hundreds of years of war will be defined in Palestinian land."

Referring to comments by Ayatollah Ruhollah Khomeini, the leader of the Islamic revolution, Mr. Ahmadinejad said, "As the imam said, Israel must be wiped off the map."