GOP Challenger to Hillary Clinton Says Democrats Support Child Molesters and Rapists. Claims Her Comment Was Taken "Out of Context" 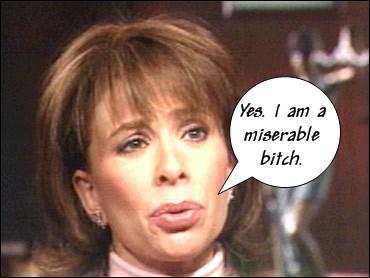 During a speech to Chemung County Republicans on Tuesday night, Pirro continued her criticism of the Democratic-controlled state Assembly for its refusal to adopt legislation that would civilly confine violent sex offenders after their prison sentences end.

"That's a difference between Democrats and Republicans - we don't want them next door molesting children and murdering women," said the Westchester County prosecutor, according to Wednesday's Elmira Star-Gazette newspaper.

That drew a sharp rebuke from the Clinton camp, and a demand for an apology.

"Ms. Pirro's comment is an affront to common decency and an outrageous insult to the five and a half million law-abiding Democrats in our state," said Clinton adviser Howard Wolfson. "With statements like these, Ms. Pirro's campaign is rapidly going from an embarrassment to a disgrace."

"This quote is out of context," he said.

"She's conveying a sense of frustration associated with it because she believes that unless this legislation is passed, we are allowing sex offenders to prey on the innocent," the Pirro aide added.

Donahue said Pirro believes the legislation "is being held up for partisan reasons by the Democratic leadership."

How typical of the increasingly desperate Republican party. They are drowning in corruption, so they start the mudslinging. Claiming that Democrats want child molesters living in your neighborhood is beyond the pale. That warrants an apology, and the Republican Party of New York should force Pirro to do that.
Posted by Dave Splash