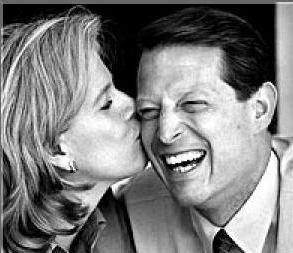 This morning, the blog The Ostroy Report began a "Draft Al Gore" petition drive to get the man who actually won the 2000 election to run again in 2008. Here is his letter to Gore followed by the address to sign the petition:

We the people of the United States of America are frustrated and angry with the present Republican leadership, and believe the country is headed dangerously in the wrong direction. There's been one colossal policy failure after another, and the current administration has perpetuated a culture of cronyism and corruption. We need to restore honesty, respect, integrity and accountability to the White House. And we need thoughtful, innovative, intelligent and moral leadership.

In 2000 you won the popular vote, and many believe the electoral college as well had it not been for political and judicial chicanery both in Florida and in the Supreme Court of the United States. Millions of us still think of you as our rightful president.

The country has changed drastically since 2000. The Iraq war has squandered $200+ billion, thousands of American lives, and untold political capital, with no end in sight. You were solidly anti-war from the get-go. The economy is challenged by unemployment, inflation, historic deficits and debt, skyrocketing gas and oil prices, declining consumer confidence and rising interest rates. You and President Clinton presided over one of the strongest economies in U.S. history. We've been shamed and embarrassed by woefully inadequate natural disaster and terror preparedness. You've been sounding the global warming alarm for years, and have worked hard to protect our precious environment. Your message would resonate quite well with a post-Katrina electorate. And we've been burdened by mounting moral, ethical and legal scandals from the current Republican leadership. Your character, integrity and family values speaks for itself.

There has been overwhelming grass-roots support for your candidacy, Mr. President. America is desperate for change. We want you to finish the successful mission that you and Bill Clinton began in 1992. We've started an online Draft Al Gore petition and we'll be amassing e-signatures from Americans nationwide who are very excited at the prospect of your candidacy. We'll contact you again shortly and keep you appraised of our progress.

Mr. President, America needs you. Please consider our urgent call for 2008. Thank you on behalf of Americans everywhere.