A Couple of Shows to Report On: Hangar 18, United State of Electronica 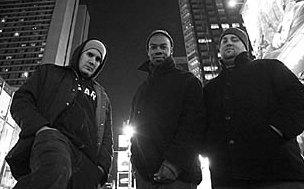 I haven't been keeping all you Dark Stuff fans up-to-date on all the shows I have been seeing. I have not stopped going to see bands, I just haven't been as excited by any of them. So far this week, I have seen two shows worthy of mention. Monday night I went down to Sokol Underground and caught NYC rap group Hangar 18. I had heard some cuts from their CD, The Multi Platinum Debut Album, a while before, but didn't know too much about them. I knew they were on the Definitive Jux label which is great. Beyond that, I was flying blind.

These guys were fucking great! Unfortunately, nobody was there to appreciate them. I'm not kidding. There was only a dozen people at the show. I have seen many great shows in my lifetime that had low attendance, but this was ridiculous. I always feel bad for artists that have to play in front of an empty room. Luckily, Hangar 18 did not let it get to them. They played their show as if it was a packed house. They were a real fun group. The opener, Cryptic, was decent, too. The two bands are touring together. There was a third act, Breathless, that opened the show. Breathless is a female rapper from Omaha. I did not catch much of her show. She seemed kind of pissed about the low attendance, and left right after her set. Maybe that shitty attitude is part of the reason why she has no local following that would come out to see her on a Monday! Anyway, check out this remix of the band's song "Where We At?." This version appears on their CD The Donkey Show Vol. 1. Listen to "Where We At (Yer in the Jungle)" by Hangar 18. 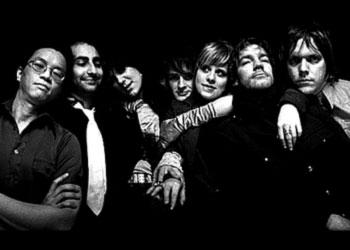 A few months ago I wrote about a band from Seattle called United State of Electronica (U.S.E.). I was all psyched to see them play with Aqueduct when they came through town earlier in the year. I ended up missing the show. At this point, I can't really remember why. Last night I made up for my earlier mistake and caught the show at O'Leavers. Openers The Divorce were quite good. They are also from Seattle, and they have something of a hard, new wave sound. I don't know if that description does much for you or not. The band was good live, though.

U.S.E. followed and blew the roof off of the tiny club. U.S.E. plays a kind of dance music, but not the kind you hear at some lame dance club. They play electronic music with analog instruments. It's a cool, original sound. There were maybe seven or eight band members; and for a club as small as O'Leavers (75 people is packed), they took up a lot of space. They got the crowd of 50 or so people on their feet and dancing (which for an Omaha indie show is quite amazing). It was a really fun show. My friend, Chris, got pretty wasted and ended up taking off at some point during the show. I hope he walked home. If you see that the band is coming to your town, give them a try. You will leave the club with a smile on your face I guarantee it.