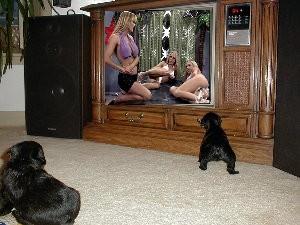 NEW DELHI (AP) - A Finnish man and his Indian girlfriend were arrested in India after neighbors complained that they were playing pornographic movies with the volume turned up too loudly, a police officer said Wednesday.

Exhibiting pornography and possessing pornographic materials are illegal in India. If convicted, the two could face three months in prison and a fine.

The two were arrested Monday night at the Finnish man's home in the town of Gurgaon, a center of India's information technology and outsourcing business, the officer said on condition of anonymity.

Aside from arresting the couple, officers also seized a television and CD player, he said.

The couple, who were not identified, were granted bail Tuesday.

No date has been set for the hearing, said the police officer.
Posted by Dave Splash