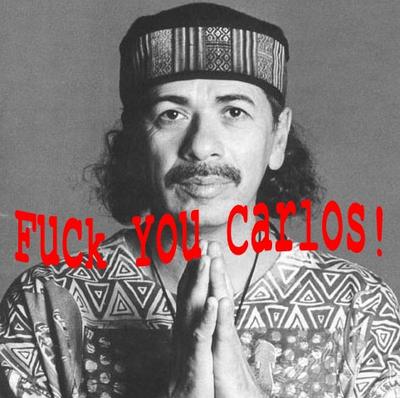 Santana says he is appalled by the standard of Simmons' music and insists the rocker hides his lack of skill behind layers of gothic clothing and black make-up. "He's not a musician, he's an entertainer," Santana says. "A musician is (John) Coltrane, Bob Marley. Kiss is Las Vegas entertainment, so he wouldn't know what music is anyway. That's why he wears all that stuff.

He continues, "A musician doesn't need the mask and the mascara so there's a difference between an entertainer and a musician."

Carlos Santana may be a decent guitarist, but let's face it, he hasn't had a good song since the 1960s. He's a fucking joke now. The most recent Santana albums just had his name on them. All of the songs were written by other people, and were supposedly "collaborations" with people like Rob Thomas of Matchbox 20 (who sucks worse than Santana). I smoke pot, but I could never get high enough to enjoy this loser's music. So, fuck you Carlos Santana -- keep your opinions to yourself.
Posted by Dave Splash