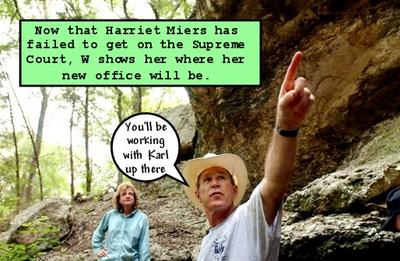 Harriet Miers withdrew her nomination to be a Supreme Court justice Thursday in the face of stiff opposition and mounting criticism about her qualifications.

President Bush said he reluctantly accepted her decision to withdraw, after weeks of insisting that he did not want her to step down. He blamed her withdrawal on calls in the Senate for the release of internal White House documents that the administration has insisted were protected by executive privilege.

"It is clear that senators would not be satisfied until they gained access to internal documents concerning advice provided during her tenure at the White House — disclosures that would undermine a president's ability to receive candid counsel," Bush said. "Harriet Miers' decision demonstrates her deep respect for this essential aspect of the constitutional separation of powers — and confirms my deep respect and admiration for her."

Miers' surprise withdrawal stunned Washington on a day when the capital was awaiting news on another front — the possible indictment of senior White House aides in the CIA leak case.

Miers notified Bush of her decision at 8:30 p.m., according to a senior White House official who said the president will move quickly to find a new nominee.

In her letter dated Thursday, Miers said she was concerned that the confirmation process "would create a burden for the White House and our staff that is not in the best interest of the country."

She noted that members of the Senate had indicated their intention to seek documents about her service in the White House in order to judge whether to support her nomination to the Supreme Court. "I have been informed repeatedly that in lieu of records, I would be expected to testify about my service in the White House to demonstrate my experience and judicial philosophy," she wrote.

"While I believe that my lengthy career provides sufficient evidence for consideration of my nomination, I am convinced the efforts to obtain Executive Branch materials and information will continue." (Read the rest here)
-----------------------------------------------
The collapse of the Bush Administration continues. Hopefully, they will be so weakened due to the indictments that there will be no way they can nominate a nutjob like Janice Rogers Brown or Robert Bork. But, this whole thing is convenitently timed to pull the base back in for Bush, so they will go out and lie for him in the Plamegate scandal. He needs surrogates to help spin, and the right has no problem lying or looking hypocritical. Watch this weekend, all the wingnuts will be back with Bush, and they will all try to minimize the breach of national security and the perjury that the Administration engaged in. Mark my words. Republicans have no shame.
Posted by Dave Splash