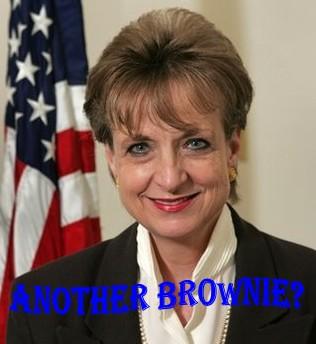 WASHINGTON - President Bush nominated White House counsel Harriet Miers to the Supreme Court on Monday, turning to a lawyer who has never been a judge to replace Sandra Day O'Connor and help reshape the nation's judiciary.

"She has devoted her life to the rule of law and the cause of justice," Bush said as his first Supreme Court pick, Chief Justice John Roberts, took the bench for the first time just a few blocks from the White House.

If confirmed by the Republican-controlled Senate, Miers, 60, would join Justice Ruth Bader Ginsburg as the second woman on the nation's highest court and the third to serve there. Miers was the first woman to serve as president of the Texas State Bar and the Dallas Bar Association. (click to read more)

Reaction is mixed to her nomination. So far, the right wingers are carping about how unhappy they are with the choice. Democrats have been virtually silent. This woman is a Bush loyalist who has never been a judge. Her ascension to her position as White House counsel comes solely from her connection to the Bush family. I have no doubt that she is a crony who will do little more than tow the Bush line while on the Court. Is she another Michael Brown? I really hope not since she can't be fired. I would like to reserve judgment, but frankly, Bush's record of promoting people personally loyal to him rather than to the nation at large, makes me skeptical. Also, since Miers has never been a judge, there is no way to know how she would rule on any issue that comes before the court. Since the GOP has invented a new standard for confirming judges -- never reveal your views on anything -- I dubt we will learn anything from her hearings. The Republicans will vote in lockstep with the White House (being the toadies that they are) and the Dems will be split.

My first question for the nominee? Do you think a 26 year old woman that marries a 90 year old man deserves all of his money? Oh, wait, she can't comment on a pending case. Damn.