It was revealed today that President Bush and his soon-to-be-indicted political aide Karl Rove have had private meetings with religious extremist James Dobson (Focus on the Family) prior to meeting with any Senators. He was assured that the new nominee for the Supreme Court, Harriet Meirs, is of the same ilk as Dobson ("I have reason to believe she is pro-life," he said). So let me get this straight, now nominees for the Supreme Court of the United States require the approval of far-right, Christian Evangelicals? I think theocricies like Iran and Saudi Arabia require the approval of Imams in order for a judge to get his job, now we have the same thing in America. Make no mistake, the Republican party has a religious litmus test for candidates AND a litmus test on abortion. Despite what all the right-wingers say about judicial nominees being judged on their "experience" and "character" they are to be judged on one issue and one issue only. Welcome to the hell that the American people must endure in Bush's America! 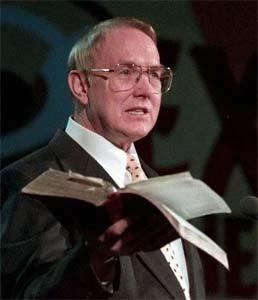 By Cenk Uygur
You know which countries have their political leaders make secret decisions with their religious leaders? If you answered the Islamic Republic of Iran, you'd be right. But apparently you would also be right if you answered the United States of America.

When asked why he is supporting President Bush's new nominee to the Supreme Court, Reverend Dobson, founder of the Focus on the Family, said, "I can't reveal it all, because I do know things that I'm privy to that I can't describe, because of confidentiality."

This is after he admitted, "It was leaked to the media that I've had conversations with Karl Rove and the White House, which is true."

What is the White House keeping secret from the rest of the country but sharing with Reverend Dobson?

This is what religious republics do. They take counsel with their imams, ayatollahs, shamans or reverends. They share secret information, close out the public and make decisions based on strange interpretations of their religion. This isn't the America I signed up for. I signed up for a secular democracy where politicians were held to account and citizens made law, not cloaked religious figures. If that's what I wanted I could have stayed in a Muslim country.

And to be fair, at this point Turkey, where I am originally from, appears to be significantly more secular than the United States. I wonder if they'd let the US into the EU with our death penalty, fundamentalist leadership and our clerics intertwined with our government.

You think I'm exaggerating? Then answer why Reverend Dobson seems to know more about the Supreme Court nominee than our Senators.

"When you put all the other information that I have been able to gather -- and you'll have to trust me on this one -- when you know some of the things that I know, that I probably shouldn't know, that take me in this direction, you will understand why I have said, with fear and trepidation, why I have said why I believe that Harriet Miers will be a good justice." -- Reverend James Dobson

At least, he's got one thing right -- he shouldn't know whatever the rest of us don't know, and apparently the White House is keeping secret from us. I wonder how Senator Biden is going to feel about being left out of the real decision making process. The White House has already talked to its reverends, the die is cast.

At the very least, the Senators should get Dobson in front of their committee and under oath ask him what secrets he's keeping from the American people. Likewise, for the unctuous Karl Rove, who is never far from a dark secret.

If you're afraid for our republic, don't worry, Reverend Dobson says he is open to changing his mind depending on what Zeus ... I mean God whispers in his ear. He implored God on his radio show, "If this is not the person you want on that Supreme Court, all you have to do is tell me so, and do it through any means you want to."

Presumably, the good reverend has now put on his tin-foil hat and is ready to receive Jupiter's ... I mean Jesus' message. Are these people serious? Is Reverend Dobson so arrogant as to believe that God will communicate with him directly? And to give him a message so specific as to tell him whether he should support Harriet Miers for the Supreme Court or not? I hope to God, God is busier than that.

We keep accommodating insane people. God doesn't talk to these snake oil salesmen disguised as reverends anymore than he talks to the mullahs in the Middle East or the voodoo priestesses in the Caribbean.

The Lord Shiva, the Prophet Muhammad, Apollo and Jesus do not have running commentary on our Supreme Court nominees.

It has been quite a two year run for Harriet Miers. In 2003, she was the President's staff secretary. She corrected grammar, she filed paperwork and she ran a tight office. Now, Reverend Dobson is awaiting word from God Himself about Harriet Frickin' Miers.

The lunatics have taken over the asylum. And we march on as if everything is normal. This is not what America is supposed to be about. We'll find out if our Senators agree soon enough. Let's see what kind of America they believe in.
Posted by Dave Splash