Bush Calls All the Republican Scandals "Background Noise" and Vows to Focus on the Nation's Needs (How About Your Resignation?) 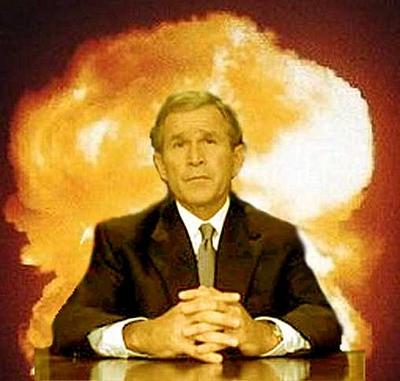 By TERENCE HUNT, AP White House Correspondent
President Bush vowed Thursday to avoid the "background noise" of criminal investigations and other Republican political problems to focus on the nation's needs.

"The American people expect me to do my job, and I'm going to," the president said.

With his political stock falling and several allies under investigation, Bush tried to keep focus on the nation's business at a Rose Garden news conference with Palestinian leader Mahmoud Abbas.

He said that prospects for Palestinians were gaining steam and noted that there have been elections and Israeli land withdrawals since Abbas' last White House visit. "It's been an eventful year," Bush said.

Abbas criticized Israel's security wall and urged the nation to lift curbs on Palestinian travel on the West Bank. "Peace requires a departure from the policies of occupation," he said.

Even with a foreign leader at his side, it was hard for Bush to ignore the contretemps of Washington. He was asked about his political problems in general, and one in particular: the troubled nomination of Harriet Miers to be a Supreme Court justice.

He acknowledged that Miers, a longtime friend, emerged from a "little different process from the norm."

After relative smooth sailing with the nomination of John Roberts to be chief justice, Bush faces criticism from both sides of the political divide — most notably from longtime conservative allies — over Miers. His claim that she is the most qualified candidate has been roundly criticized.

With opponents calling for her withdrawal, Bush said the process will show that Miers is a "competent, strong, capable woman" who shares his conservative judicial philosophy.

A federal prosecutor is wrapping up his investigation into the leak of a CIA agent's identity, putting the White House on edge as the fate of two senior advisers hang in the balance. Bush's long-serving political confidant, Karl Rove, and a top aide to Vice President Dick Cheney, I. Lewis "Scooter" Libby, are key figures in the inquiry.

DeLay and Frist are loyal foot soldiers to Bush on Capitol Hill. But their ethical issues threaten the White House legislative agenda.

Bush's political woes came into focus with a natural disaster: the sluggish response of state, local and federal governments to Hurricane Katrina dented his aura of sure-footed leadership. He has sought to recover politically by promising a massive relief effort on the Gulf Coast.

Asked how he is dealing with such a full plate, Bush said: "There is some background noise here, a lot of chatter, a lot of speculation and opining, but the American people expect me to do my job and I'm going to."

Polls show six in 10 Americans disapprove of Bush's job performance and even more believe the country is headed on the wrong course. Support for the president's handling of the Iraq was has also plummeted as the mood of the nation has soured.

I love how Bush views the disastrous response of his government to Hurricane Katrina, the imminent indictment of his top political adviser, the indictments of the Majority leaders of BOTH the House and Senate, the rejection of his croney Supreme Court nominee, and his approval rating being under 40% as "background noise." I'd say it's a mushroom cloud, buddy. Your administration is history. Have a fun next couple of years, W.