Al Queda Is Hiring...Maybe "Brownie" Can Get Work There! 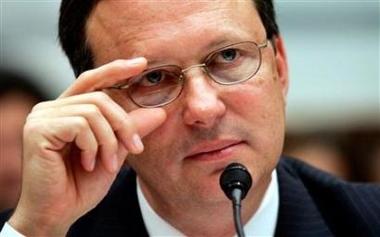 DUBAI (Reuters) - Al Qaeda has put job advertisements on the Internet asking for supporters to help put together its Web statements and video montages, an Arabic newspaper reported.

The London-based Asharq al-Awsat said on its Web site this week that al Qaeda had "vacant positions" for video production and editing statements, footage and international media coverage about militants in Iraq, the Palestinian territories, Chechnya and other conflict zones where militants are active.

The paper said the Global Islamic Media Front, an al Qaeda-linked Web-based organization, would "follow up with members interested in joining and contact them via email."

The paper did not say how applicants should contact the Global Islamic Media Front.

Al Qaeda supporters widely use the Internet to spread the group's statements through dozens of Islamist sites where anyone can post messages. Al Qaeda-linked groups also set up their own sites, which frequently have to move after being shut by Internet service providers.

The advertisements, however, could not be found on mainstream Islamist Web sites where al Qaeda and other affiliate groups post their statements.

Asharq al-Awsat said the advert did not specify salary amounts, but added: "Every Muslim knows his life is not his, since it belongs to this violated Islamic nation whose blood is being spilled. Nothing should take precedence over this."

The Front this week issued the second broadcast of a weekly Web news program called Voice of the Caliphate, which it says aims to combat anti-Qaeda "lies and propaganda" on major global and Arab television channels such as CNN and Al Jazeera.

Last month it issued an English-language video on the Internet called Jihad Hidden Camera which showed sniping and bombing attacks against U.S. forces in Iraq, and carried comical sound effects as well as laugh tracks.

Al Qaeda and other groups have increasingly turned to the Internet to win young Muslims over to their war against Western-backed governments in Arab and Muslim countries.

Islamist insurgents fighting U.S. forces and the U.S.-backed government in Iraq have often posted slick montages of their military activities, including beheadings of hostages, on the Internet
Posted by Dave Splash