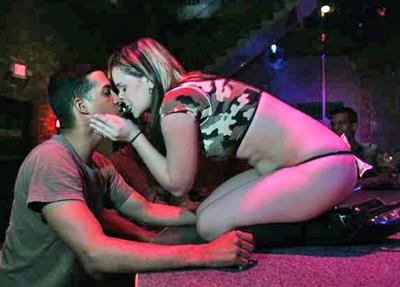 
NEW ORLEANS — By the wee hours of the morning Tuesday, if you looked past the rotting mounds of garbage on the sidewalk and the fact that most of the customers were carrying firearms, the city — right or wrong — looked a bit familiar again.

For a while, it was just another night at a Bourbon Street strip joint, a little exhilarating and a little depressing at the same time.

Up on stage was Britni Carrubba, who fled Hurricane Katrina with nothing but the clothes on her back. For three weeks she had waded through hell, shuffling from shelter to shelter, sleeping in her car. She was separated from her family. Her home was destroyed. But by Monday night, she had figured that if she didn't get back to work, then the storm had won.

So she found a ride into New Orleans and walked through a door beneath a neon depiction of crossed legs and high heels. At a club called Deja Vu, Carrubba became the first exotic dancer to return to New Orleans.

She spent her evening giving private dances in the Champagne Lounge and swinging from a silver, floor-to-ceiling pole.

When the club opened its doors, dozens of men started streaming in: New Orleans police officers, National Guard soldiers in their camouflage uniforms, engineering contractors who had spent the day working on the city's levee system. One of the contractors was wearing a T-shirt that read, "Last Clean Shirt."

"Go do your thing," Mohney told her. "Shake your booty."

She ran down the stairs toward the stage, wearing knee socks, a nose ring and not much else.

"It's a good day," Mohney said, his arms folded on his chest.

"It's a grand day," Olmstead said.

About 40 dancers typically rotate between two stages at Deja Vu. They evacuated the city after Katrina, finding gigs at sister clubs in Michigan, New York and California.

Olmstead and Mohney also left New Orleans when the levees broke but got back into the city as soon as they could.

They surveyed the building — which is on the edge of the now largely deserted French Quarter — and found that although the roof was destroyed, the lower two floors were in good shape. They borrowed a carpet shampooer from a hotel and chilled beers with ice donated by the National Guard.

Olmstead and Mohney located four "girls," as they are known in the business, who said they could either drive into the city or get a ride.

"Britni, Leah, Baylee and … I can't remember the other one's name," Olmstead said.

"They're here to be a part of the reconstruction," Mohney said.

He calculated that the club had lost $350,000 in revenue since Katrina struck more than three weeks ago.

"I don't think you ever make back what you lose," Mohney said. "You just try to lose less."

Toward that end, he made sure the ATM machine was working again so customers could get their money and make change. Soon the men lining the stage had piles of $1 bills next to their beers, which they tucked into the strings of the dancers' thongs. "I know what America is going to think," said Tom Wendling, 34, a New York law enforcement officer assisting in the reconstruction effort. He has spent his days rescuing puppies and talking stragglers out of their homes in the 9th Ward. But on Monday night, he was at Deja Vu with two friends.

"America is going to think that this is predictable, that this is the naughty stuff that always goes on here," he said. "But anybody who has been down here knows that this is a needed diversion."

One man who, like most of the customers, declined to provide his name, paid $50 for a private dance with Carrubba. She led him upstairs to a room that contains a series of booths lined with thick, leaded glass that no one can see through.

"Don't touch me. I'm married," he told her. "I just want you to take your clothes off and stand there. I haven't seen a woman in three weeks."

"People need some enjoyment," Carrubba said later. "I think all the looting and everything would have been stopped if people had things like this to do the whole time," she said.

"This, right here, is doing a lot of good for a lot of people."

Then it was time to go back to work. "Rock You Like a Hurricane," by the Scorpions, was blasting through the club. Carrubba ran toward the stage.

"We're going to be all right," she called over her shoulder. "Let me know if you want a dance."
Posted by Dave Splash