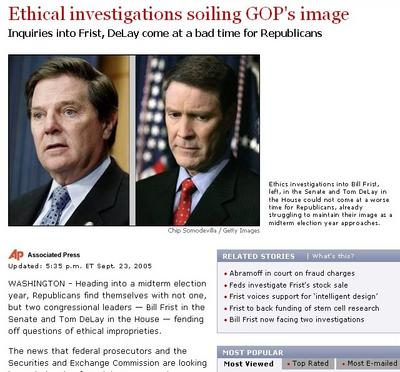 WASHINGTON - Heading into a midterm election year, Republicans find themselves with not one, but two congressional leaders — Bill Frist in the Senate and Tom DeLay in the House — fending off questions of ethical improprieties.

The news that federal prosecutors and the Securities and Exchange Commission are looking into Frist’s sale of stock in HCA Inc., the hospital operating company founded by his family, comes as a criminal investigation continues of Jack Abramoff, a high-powered Republican lobbyist, and his ties to DeLay of Texas.

Less than a week ago, a former White House official was arrested in the Abramoff investigation.
Story continues below ↓ advertisement

For Republicans, the timing couldn’t be worse.

“The last thing you needed was a Martha Stewart problem,” Marshall Wittman, a one-time conservative activist who now works for the centrist Democratic Leadership Council, said of Frist. “He doesn’t even have a good clothing line or a popular television show.”

Stewart, the homemaking doyenne, served five months in federal prison for lying to authorities about a stock deal and nearly six months more in home confinement.

Hoping to beat the odds
The midterm elections occur in just over 13 months and Republicans face the historic reality that the party controlling the White House typically loses seats in non-presidential years.

Shadowing the GOP outlook is President Bush’s diminishing approval ratings as the war in Iraq, rising oil prices and the need for billions in federal spending after devastating hurricanes threaten to overwhelm a second-term agenda.

“It may not cost the Republicans any seats directly, but it’s something they don’t need right now,” said John J. Pitney, a professor at Claremont McKenna College in California who once worked as a research analyst for House Republicans. “They’ve got plenty of problems as it is.”

Still, in the Republican-controlled Congress, Democrats have more Senate seats to defend — 17 to the GOP’s 15 — and redistricting has made fewer House seats competitive.

Charlie Black, a Republican consultant with close ties to the White House, expects Frist to be cleared by next year and any whiff of scandal to be gone.

“I suspect the DeLay matter and this matter will be resolved long before November ’06,” Black said.

An unconventional political past
Frist cultivated a political outsider image when he ran for the Senate in 1994. “I don’t want a career in Washington. I want change,” said the Tennessee heart surgeon, who didn’t register to vote until 1988 and didn’t vote until he was 36.

The year 1994 marked the Republican revolution, when the GOP seized control of Congress after decades of Democratic rule in the House and years in the Senate. The GOP portrayed their rivals as beholden to special interests and corrupt after years of entrenchment.

More than a decade later, Republicans are trying to avoid the perception that they resemble the Democrats they replaced.

“The overall problem the Republican Party has is it is increasingly looking like Tammany Hall,” Wittman said. “An odor of sleaziness is enveloping the Republicans and seeping into the administration.”

Democrats seized on the latest development, with party chairman Howard Dean criticizing Frist and arguing that Republicans “have made their culture of corruption the norm.”

The challenge for Frist is to clear his name in a federal investigation while trying to maintain his hold on the post of Senate majority leader.

Frist came to power in 2002 when Republicans forced out Sen. Trent Lott, R-Miss., after he made racially tinged remarks in support of former Sen. Strom Thurmond, R-S.C., a one-time segregationist.

Following in Lott's footsteps?
If Republicans see Frist and the probes as a drag, he could suffer the same fate as Lott. Frist also is a lame-duck leader who has indicated he won’t seek another term.

Chris Lehane, a Democratic consultant who has managed scandals, said Frist’s political strategy would be to get information out, but that approach is hardly what a lawyer would advise his client.

An insider trading investigation also raises the possibility of civil action by shareholders and a discovery process that “disgorges all kinds of documents,” Lehane said.

“Even information benign in another type of environment — what about this phone message from your brother” — has added significance, Lehane said.

Frist has been mentioned as a potential presidential candidate in 2008 — a prospect that looks less likely with the federal probe and his break with conservatives on embryonic stem-cell research.

“That romance was over before it started,” Wittman said.
Posted by Dave Splash