How the GOP Short-Changes US Troops. Why Does the Right Hate Soldiers So Much? 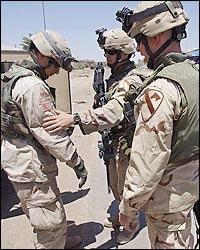 This is reason enough for Rumsfield to be fired. He should have been fired over Abu Ghraib, but refusing to supply troops with body armor...he should be tried for treason. When will someone on the right put the country ahead of party?

WASHINGTON (Sept. 29) - Nearly a year after Congress demanded action, the Pentagon has still failed to figure out a way to reimburse soldiers for body armor and equipment they purchased to better protect themselves while serving in Iraq.

Soldiers and their parents are still spending hundreds and sometimes thousands of dollars for armor they say the military won't provide. One U.S. senator said Wednesday he will try again to force the Pentagon to obey the reimbursement law it opposed from the outset and has so far not implemented.

Sen. Christopher Dodd, D-Conn., said he will offer amendments to the defense appropriations bill working its way through Congress, to take the funding issue out of the hands of Defense Secretary Donald H. Rumsfeld and give control to military unit commanders in the field.

"Rumsfeld is violating the law," Dodd said in an interview with The Associated Press. "It's been sitting on the books for over a year. They were opposed to it. It was insulting to them. I'm sorry that's how they felt."

Pentagon spokeswoman Air Force Lt. Col. Ellen Krenke said the department "is in the final stages of putting a reimbursement program together, and it is expected to be operating soon." But defense officials would not discuss the reason for the delay.

Krenke said the Pentagon's first priority is to ensure that soldiers "have all they need to fight and win this nation's wars."

Others don't see it that way.

"Your expectation is that when you are sent to war, that our government does everything they can do to protect the lives of our people, and anything less than that is not good enough," said a former Marine who spent nearly $1,000 two weeks ago to buy lower-body armor for his son, a Marine serving in Fallujah.

The father asked that he be identified only by his first name - Gordon - because he is afraid of retribution against his son.

"I wouldn't have cared if it cost us $10,000 to protect our son, I would do it," said Gordon. "But I think the U.S. has an obligation to make sure they have this equipment and to reimburse for it. I just don't support Donald Rumsfeld's idea of going to war with what you have, not what you want. You go to war prepared, and you don't go to war until you are prepared."

Under the law passed by Congress last October, the Defense Department had until Feb. 25 to develop regulations for the reimbursement, which is limited to $1,100 per item. Pentagon officials opposed the reimbursement idea, calling it "an unmanageable precedent that will saddle the DOD with an open-ended financial burden."

In a letter to Dodd in late April, David Chu, undersecretary of defense for personnel, said his office was developing regulations to implement the reimbursement, and would be done in about 60 days.

Soldiers and their families have reported buying everything from higher-quality protective gear to armor for their Humvees, medical supplies and even global positioning devices.

"The bottom line is that Donald Rumsfeld and the Defense Department are failing soldiers again," said Paul Rieckhoff, executive director of Operation Truth, an advocacy group for Iraq veterans.

"It just became an accepted part of the culture. If you were National Guard or Reserve, or NCOs, noncommissioned officers, you were going to spend a lot of money out of your pocket," said Rieckhoff, who was a platoon leader with the 3rd Infantry Division and served in Iraq from the invasion in March 2003 to spring 2004. "These are bureaucratic failures, but when they make mistakes like this, guys die. There has been progress made, but we're still seeing serious shortages."

Dodd said he is worried the Pentagon will reject most requests for reimbursement. Turning the decision over to the troop commanders will prevent that, he said, because the commanders know what their soldiers need and will make better decisions about what to reimburse.

Dodd also said he wants to eliminate the deadline included in the original law, which allowed soldiers to seek reimbursement for items bought between September 2001 and July 2004. Now, he said, he wants it to be open-ended.

"I'm tired of this, obviously they're not getting the job done," said Dodd. "If you have to go out and buy equipment to protect yourself, you're going to get reimbursed."
Posted by Dave Splash