The End of the Bush Era (Five Years Too Late) 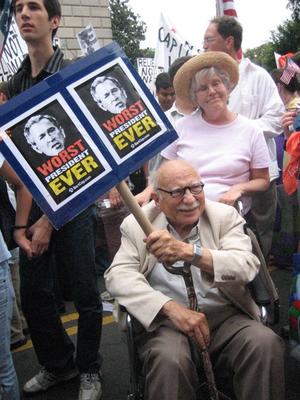 The Bush Era is over. The sooner politicians in both parties realize that, the better for them -- and the country.

Recent months, and especially the past two weeks, have brought home to a steadily growing majority of Americans the truth that President Bush's government doesn't work. His policies are failing, his approach to leadership is detached and self-indulgent, his way of politics has produced a divided, angry and dysfunctional public square. We dare not go on like this.

The Bush Era did not begin when he took office, or even with the terrorist attacks of Sept. 11, 2001. It began on Sept. 14, 2001, when Bush declared at the World Trade Center site: "I can hear you. The rest of the world hears you. And the people who knocked these buildings down will hear all of us soon." Bush was, indeed, skilled in identifying enemies and rallying a nation already disposed to action. He failed to realize after Sept. 11 that it was not we who were lucky to have him as a leader, but he who was lucky to be president of a great country that understood the importance of standing together in the face of a grave foreign threat. Very nearly all of us rallied behind him.

If Bush had understood that his central task was to forge national unity, as he seemed to shortly after Sept. 11, the country would never have become so polarized. Instead, Bush put patriotism to the service of narrowly ideological policies and an extreme partisanship. He pushed for more tax cuts for his wealthiest supporters and shamelessly used relatively modest details in the bill creating a Department of Homeland Security as partisan cudgels in the 2002 elections.

He invoked our national anger over terrorism to win support for a war in Iraq. But he failed to pay heed to those who warned that the United States would need many more troops and careful planning to see the job through. The president assumed things would turn out fine, on the basis of wildly optimistic assumptions. Careful policymaking and thinking through potential flaws in your approach are not his administration's strong suits. 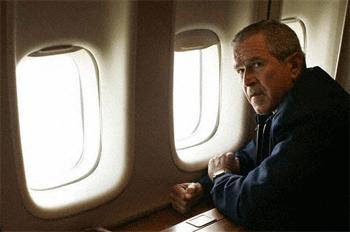 W. watches his Presidency go down the toilet from aboard Air Force One.

And so the Bush Era ended definitively on Sept. 2, the day Bush first toured the Gulf Coast States after Hurricane Katrina. There was no magic moment with a bullhorn. The utter failure of federal relief efforts had by then penetrated the country's consciousness. Yesterday's resignation of FEMA Director Michael Brown put an exclamation point on the failure.

The source of Bush's political success was his claim that he could protect Americans. Leadership, strength and security were Bush's calling cards. Over the past two weeks, they were lost in the surging waters of New Orleans.

But the first intimations of the end of the Bush Era came months ago. The president's post-election fixation on privatizing part of Social Security showed how out of touch he was. The more Bush discussed this boutique idea cooked up in conservative think tanks and Wall Street imaginations, the less the public liked it. The situation in Iraq deteriorated. The glorious economy Bush kept touting turned out not to be glorious for many Americans. The Census Bureau's annual economic report, released in the midst of the Gulf disaster, found that an additional 4.1 million Americans had slipped into poverty between 2001 and 2004.

The breaking of the Bush spell opens the way for leaders of both parties to declare their independence from the recent past. It gives forces outside the White House the opportunity to shape a more appropriate national agenda -- for competence and innovation in rebuilding the Katrina region and for new approaches to the problems created over the past 4 1/2 years.

The federal budget, already a mess before Katrina, is now a laughable document. Those who call for yet more tax cuts risk sounding like robots droning automated talking points programmed inside them long ago. Katrina has forced the issue of deep poverty back onto the national agenda after a long absence. Finding a way forward in -- and eventually out of -- Iraq will require creativity from those not implicated in the administration's mistakes. And if ever the phrase "reinventing government" had relevance, it is now that we have observed the performance of a government that allows political hacks to push aside the professionals.

And what of Bush, who has more than three years left in his term? Paradoxically, his best hope lies in recognizing that the Bush Era, as he and we have known it, really is gone. He can decide to help us in the transition to what comes next. Or he can cling stubbornly to his past and thereby doom himself to frustrating irrelevance.